"It's gonna be an exciting night!" Both the Miami Heat and Miami Dolphins hosted Chanukah celebrations organized by Chabad during their games with Cantor Yossi Lebovic and singer Eli Marcus. Full Story, Photos, Video "It's gonna be an exciting night!" Both the Miami Heat and Miami Dolphins hosted Chanukah celebrations organized by Chabad during their games with Cantor Yossi Lebovic and singer Eli Marcus. Full Story, Photos, Video

Entering American Airlines Arena Monday night, Dale McClean, Miami Heat’s host and master of ceremonies, could not help but feel the electricity in the air. The arena and surrounding concourse were colorfully decked out with bright digital menorahs recognizing Jewish Heritage Night and the Jewish festival of Chanukah.

Just prior to tip off, Dale took center court to greet the crowd. His booming baritone surged with excitement, “I see em’ all over with their cool Hanukah shirts and I hear em’ cheerin’ in the stands. It’s gonna be an exciting night – we’re celebrating Hanukah!” Moments later, Cantor Yossi Lebovic offered a stirring rendition of the National Anthem.

The nearly sold out arena of sports enthusiasts that came to watch the Miami Heat take on the Utah Jazz were then treated to a night filled with Chanukah festivities. Several thousand in attendance were members of the Jewish community who came exclusively to celebrate the 11th annual Jewish Heritage Night.

During a first quarter timeout, the Miami Heat invited event organizers, Chabad of Florida’s Rabbi Pinny Andrusier of Cooper City and Rabbis Chaim and Eli Lipskar of the Rok Family Shul in Downtown Miami, onto the playing floor to be recognized for coordinating the evening’s fun event.

The rabbinic trio and select sponsors then proceeded to the Bacardi Ocho platform for a special menorah lighting ceremony that took place during the next stoppage of play. After Rabbi Chaim Lipskar wished all in attendance a happy Chanukah, Rabbi Pinny followed with the chanting of the blessings while the kindling of the eight branch holiday candelabra took place. The ceremony was met with loud applause and a cheerful ovation.

Highlighting the evening for most was an electrifying halftime show featuring NBA all time great, Alonzo Mourning and Burnie, the Heat mascot. Jewish rock band ‘Pardes’ serenaded a crowd of thousands as they strolled onto the arena’s East Plaza for the intermission. Jumping, dancing and singing, the exuberant fans were energized by the array of upbeat Jewish ballads.

The show hit a crescendo when the packed plaza euphorically reacted to the grand entrance of the seven-foot Miami Heat All Star, affectionately called ‘Zo. Upon gracing the stage, to the delight of the crowd, Zo showed his agility and prowess as he joined the chorus line of rabbis strutting their dance moves. The audience then stood in amazement as the former pro center effortlessly reached the top candle of the giant 9-foot menorah to light the shamash flame. Jewish music star, Mendy J beautifully sang the blessing melodies for the half time ceremony.

The success of the Miami Heat’s Chanukah sporting event has been contagious. As pioneers of the hugely successful event, Rabbi Pinny and Rabbi Lipskar are often called upon to consult with other venues wishing to replicate similar events in their respective locations. Today, nearly every professional sports team residing in a city with a formidable Jewish community hosts its own Jewish Heritage Chanukah event. But as Rabbi Eli Lipskar points out, “Miami is still number one!”

Chabad’s quest to host large menorah lightings in the most unique public venues follows the directive of the Rebbe who in 1974 called for a campaign to “promote the miracle of Chanukah and inspire its observance.”

“As with all his Mitzvah campaigns, the Rebbe was clearly the visionary, asking one and all to illuminate the outside world with the lights of the menorah, thus spreading the miracle and message of Chanukah to the most remote places – freedom of religion, dispelling darkness through light not with a stick, and that goodness and kindness will ultimately prevail over evil and hate,” explained Rabbi Pinny.

Witnessing the ever-increasing popularity of the Miami Heat event and the growing trend of sports venues hosting the event, the Miami Dolphins contacted the Chabad rabbis to bring the event this year to Hard Rock Stadium.

Last Sunday, as the Miami Dolphins hosted the Cincinnati Bengals, during a second quarter timeout, Jewish music sensation Eli Marcus led a grand menorah lighting ceremony to the roaring cheers of the nearly 70,000 fans. The Dolphins also offered a pre game kosher tailgate concert with Marcus as part of the Chanukah celebration.

The Jewish Heritage events have become the most anticipated events come Chanukah, especially for children, as younger fans are given several opportunities during the games to make their way down onto the floor to greet the players.

Rabbi Chaim concluded, “The Festival of Lights has become a universal holiday. In addition to the positive message of peace and goodwill, people of all faiths attending the games enjoyed the music, fun and jelly donuts.” 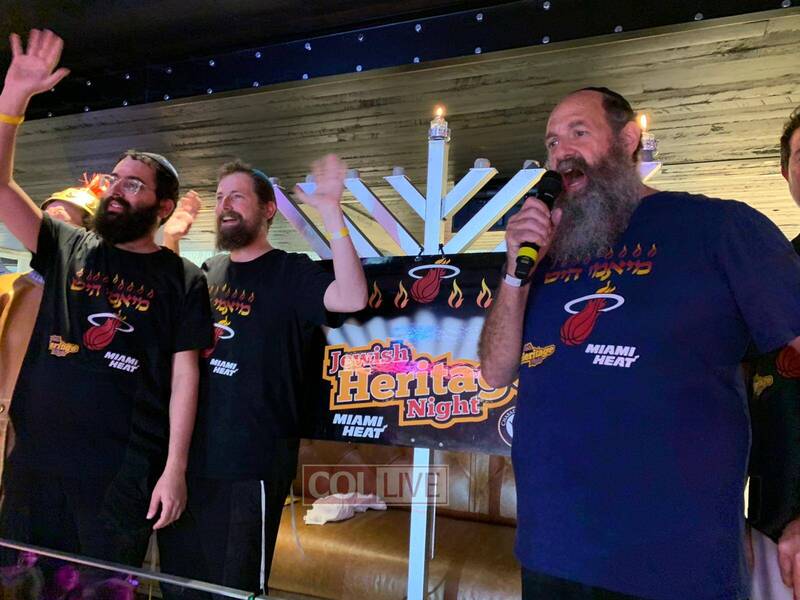 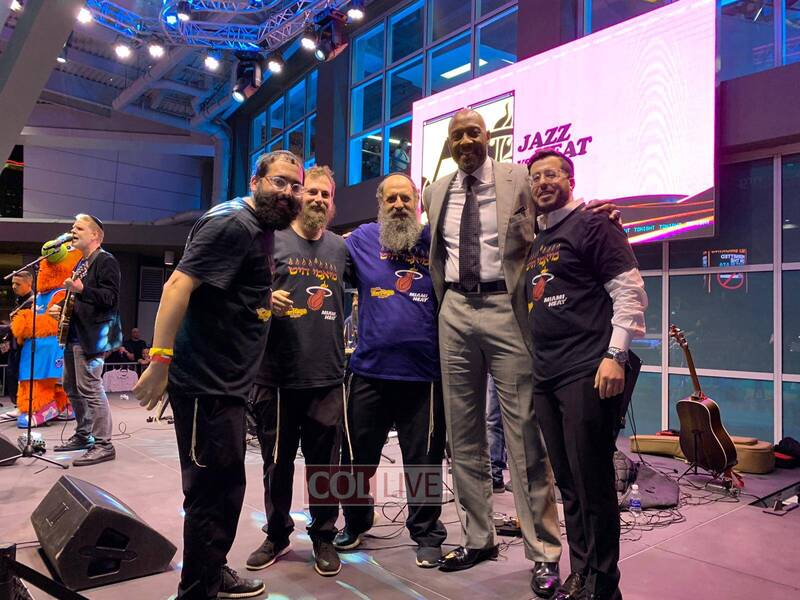 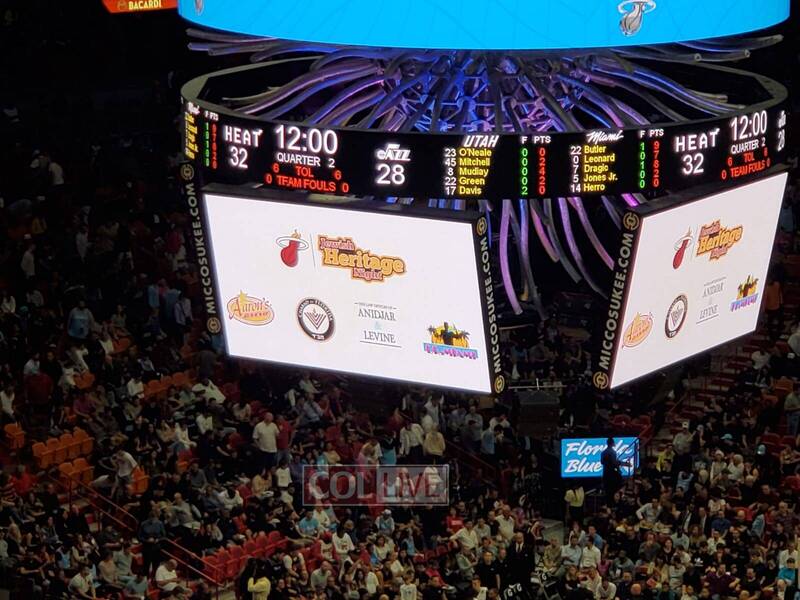 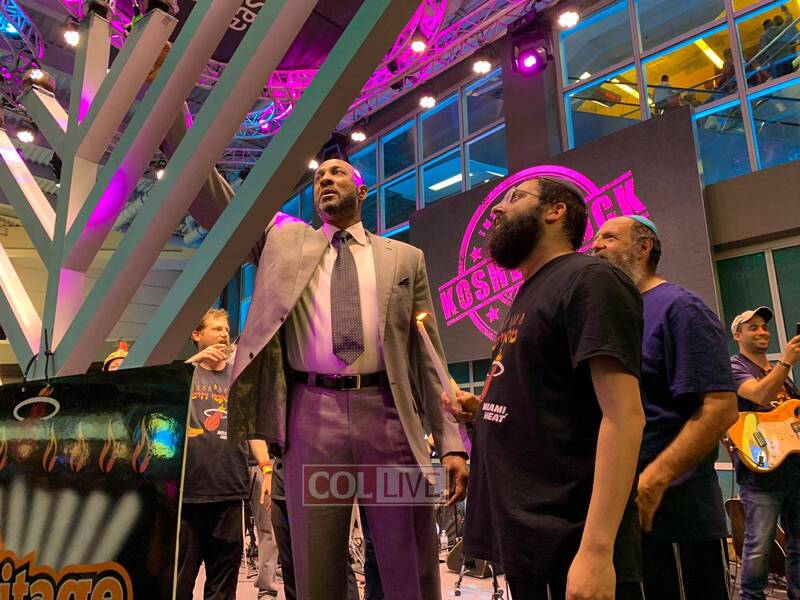 Any Relevance to the Secular New Year?