An Open Letter to the Crown Heights Community

From the COLlive Inbox: Crown Heights United thanks all members of the Crown Heights community who showed up to vote in last week’s primary elections, and in the special election in March. They are planning a community project. Full Story From the COLlive Inbox: Crown Heights United thanks all members of the Crown Heights community who showed up to vote in last week’s primary elections, and in the special election in March. They are planning a community project. Full Story

We are writing to thank all members of the Crown Heights community who showed up to vote in last week’s primary elections, and in the special election in March.

As you are aware, there are several factions that are gaining political influence in Brooklyn, and in New York in general. These factions are pushing ideas that will directly affect our quality of life, public safety, and the chinuch of our children. Crown Heights United was formed by a group of local activists and business leaders with a cross section of political beliefs who came together with the goal of motivating our community to use our voting power to protect our quality of life, and Yeshivas.

With this in mind, Crown Heights United commits to working harder to include more voices from within our community. We are trying to be as inclusive as possible, and are here to listen to your voice and would welcome you to get in touch and join our efforts.

We have seen a more than 65% increase in voter turnout amongst Anash in primary elections. These greater numbers gave our community a stronger voice, and made us a key player in the outcome of these elections. We are becoming a voter base whose voice matters to local leaders. So to each one of you who registered and voted, thank you!

With regards to those who asked about endorsements in the most recent election; there was not a consensus on whether to endorse some of the candidates running, so we put our personal preferences aside and tried to limit our endorsements to candidates on whom a majority could agree. We believe that it is more important to bring out the vote than to be able to claim to have endorsed the winner.

People ask why we don’t elect someone who represents all our viewpoints. This is because although we may have the voter potential among Anash living in Crown Heights, there are still many who are not registered and/or don’t vote. One could only imagine the weight our communal viewpoint would have if we all registered and voted and came together in achdus for the betterment of our community. We would have enough votes to elect a candidate and make a serious difference.

We also recognize that a significant number of people may not understand how their vote directly impacts their own life and benefits their family. We are working on a fun project to create more awareness on how your vote matters. 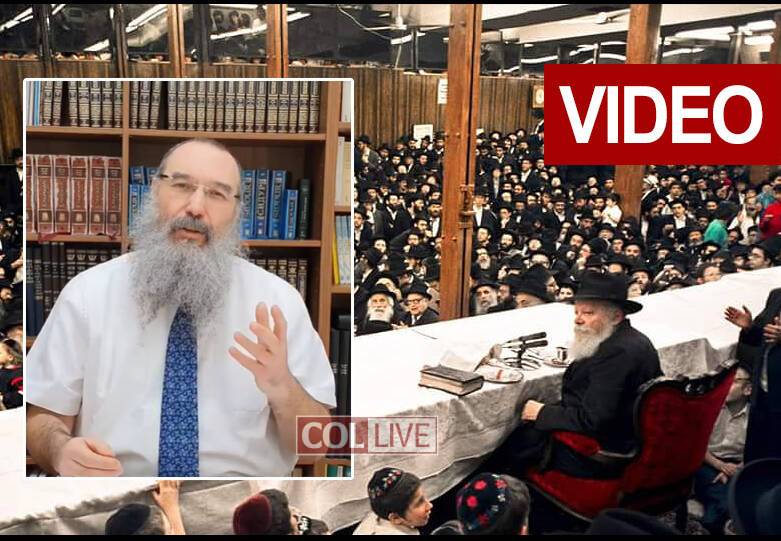 If you stopped shoving this anti-Torah right wing agenda down this communities throat, then maybe it would feel more inclusive. I can’t attend a Shabbos meal without hearing racist, misogynistic, hateful rhetoric at the table. It’s not normal. If this community could hold classes and lectures about what’s going on in our country and how it is harming not just democracy, not just women, not just the black community and immigrants and countless others, but the Jewish community as well, then maybe we would see progress and inclusivity. All this to say – please better yourselves. We need to open… Read more »

12
-46
Reply
Berel
Reply to  Include the liberals

You seem very concerned. Thank you for your concern.

1
-5
Reply
Shalom Aleichem
Reply to  Include the liberals

Come to me for shabbos we don’t discuss politics.

This person has an issue with reality.

3
-6
Reply
Unstable
Reply to  Include the liberals

This is not meant as a retort or an insult. Your postings–and it’s fairly easy to compare writing styles–come across as unhinged and out of touch with reality. What “literal Nazis” were at the Capitol? The only murder there was the shooting of a white lady by a black cop. You fail to mention–yet you sound so concerned about blacks–the literal slaughter of blacks being committed by other blacks in EVERY big Democratic city in the country. You fail to mention where in the Torah (that you seem so concerned about) where there is a license to perform abortion on… Read more »

22
-5
Reply
As a crown heightser
Reply to  Unstable

Even I can see through the lies you’re telling. the nazis at the capitol were those men wearing the shirts that said “Auschwitz” on them. the number of black people killed by white men is drastically higher than black on black crime, not that that gets you out of the responsibility of being actively anti-racist Abortion on demand may unfortunately not be sanctioned by halacha, but it is required in some cases according to orthodox Rabbis. If this country obliterates abortion altogether like conservatives want, then that will go against halacha and there goes religious freedom. Liberals are the only… Read more »

8
-16
Reply
Anonymous
Reply to  As a crown heightser

Up is down. Right is left. Black is white. Source please for more black deaths by white men than black on black crime?

There are cases where killing a person is required according to Orthodox rabbis. For example, if Person A is pursuing Person B with intent to kill or rape. Now, many states’ laws prevent you from carrying a gun to do so, which violates the religious freedom to follow that halachah.

Are you therefore in favor of changing such laws to allow for that, or is that different because reasons? And do those reasons just happen to dovetail with what the New York Times or Joy Behar are in favor of or against?

Actually many states have what is called Defense of Third Party. That means you can use potentially lethal force to stop someone from killing another person.

You’ll need to articulate your circumstances and will have a large attorney bill but those laws do exist.

All if this is covered in Concealed Carry courses and defensive shooting courses.

1
-1
Reply
You're missing the point
Reply to  Actually

If you can’t carry a gun in those states or localities, then you lack the potentially lethal force. So I ask again: does the poster to whom I was responding favor the broadening of rights to own and carry guns, following the same logic that otherwise it’s an infringement on our rights to practice our religion? Or is that different because reasons?

Even if you don’t care about halacha and support banning a woman’s right to choose, do you think these christian religious impositions in America are going to end there? It starts with taking away women’s freedom and it could lead to requiring all children to only pray from a christian book of worship, or for all people to partake of christian holidays… When you stop separating church and state, this doesn’t protect Judaism, it weakens it. We as orthodox Jews benefit from the removal of religion within our government and our laws. It allows us to practice religion however we… Read more »

3
-3
Reply
Explain
Reply to  So foolish

Explain, specifically, what freedom was taken away from women.

The Constitution does not grant freedom to abort a fetus. The supposed 14th Amendment Right to Abortion was an incorrect ruling that was corrected by the Supreme Court.

A woman’s life being in danger from a pregnancy is very rare.

2
-2
Reply
FALSE
Reply to  As a crown heightser

You stated “the number of black people killed by white men is drastically higher than black on black crime”.

3
0
Reply
Do you think
Reply to  Include the liberals

that maybe it has to do with you? If you start spouting off at the table about how anyone who opposes abortion for any reason is anti-woman, then yes, you’re going to get pushback (and this is true whether you’re a man or a woman). Same with a lot of other topics. (You might also try toning it down with the “literal Nazis” and “white men with guns” junk, when not a single protester on Jan. 6 used a gun, and indeed it was a black officer who fatally shot one of them.) Before you start tarring our entire community… Read more »

11
-1
Reply
Berel
Reply to  Include the liberals

I can count with less than the figures of one hand the shabbos meals I have attended in my life that met your description. If you cannot attend a single one without hearing it, then perforce you define these terms differently than does the community at large. It’s therefore impossible to be inclusive of you and those that think like you if those modes of behavior repel you, unless there is a conscience effort to refrain from speaking about current events at the shabbos table (though that too may not be enough to accommodate the wokest among us). But we… Read more »

8
-1
Reply
Politics by a shabbos table?
Reply to  Include the liberals

Not sure where you eating. Most people I know don’t discuss politics by their shabbos table

11
-1
Reply
Anonymous
Reply to  Include the liberals

Projection at its finest. How about you practice what you preach and show acceptance, tolerance, open-minded inclusivity to these terrible right wing view points you cannot relate to?

The way this community votes terrifies me, but BH the state as a whole is progressive and overpowers the conservative fascists within.

And by “progressive,” you mean that it supports such things as disposing of unwanted babies on demand, allowing men to claim that they’re women and vice versa, and so forth.

As for “conservative fascists,” you do understand that “fascist” doesn’t just mean “someone with whom I disagree,” right? Fascism is the belief that “everything within the state and nothing outside of the state,” which sounds an awful lot like the Democrat platform.

You sound like someone who refused to get vaccinated for Covid. That was your body, your choice, even though I completely disagreed with it. So how dare you even reference what I do with my body.

Since when is a fetus “your body?”

Your body and everything else that ever was, is, or will be belongs to G-d.

Here I didn’t say a word about vaccines, yet you confidently state that I “sound like” I hold a particular view on the subject. I think we begin to see the source of the problem at the Shabbos tables you attend: the unfounded assumptions, the question-begging, the chip on the shoulder.

This is a great letter. Can you next time write this, say, a week or two before the election. Things seem to work out better than way in terms of turnout.

8
0
Reply
Get the popcorn

These comments are pure entertainment

I am shocked to read that there is support for left wing progressives amongst our own. Whoever supports them is delusionary. The progressives are out to destroy yiddishkeit and all the values that we stand for. We are facing a much bigger threat of anti semitism from the progressive left. The conservatives are not nazis even though there are a few in that camp. The alliance between the far left and radical islam is alarming. The defund police and bail reform movement, are the biggest threat to our safety. The conservative governor of the state of Florida is a true… Read more »