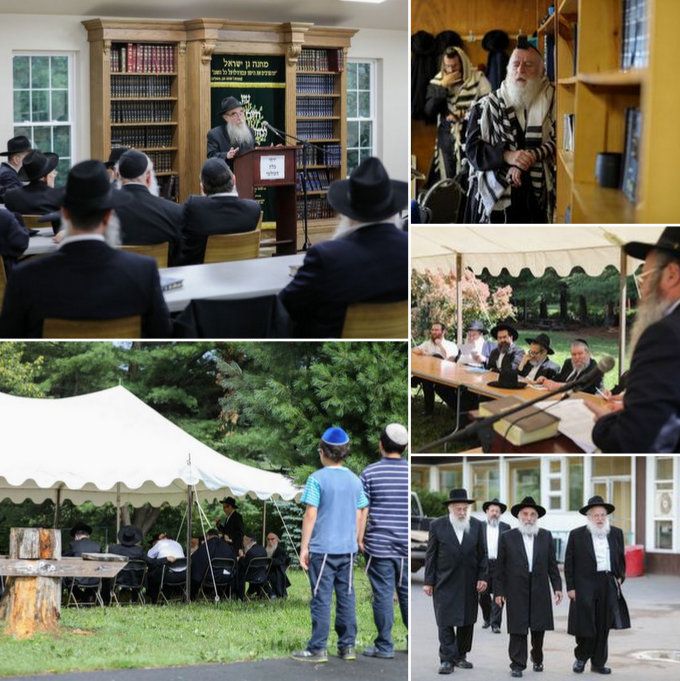 The scholarly participants of the Global Yarchei Kallah held at Camp Gan Israel in Parksville, New York, got to study in the camp’s newly built Beis Medrash on Thursday evening.

The “Zal” was built especially for staff members of the camp to daven and learn at any time during the day between responsibilities for their roles in the veteran Chabad overnight camp for boys.

A beautiful wooden Aron Kodesh adorns the east wall of the Zal, alongside bookshelves of seforim, from Gemara to Likutei Sichos and the Rebbe’s Maamarin for staff members to immerse themselves in learning.

Rabbis, Roshei Yeshiva and Mashpiim were impressed at the structure and especially the good intentions behind it. In opening remarks, Rabbi Avraham Shemtov publically thanked Dovid Junik and Yerachmel Jacobson and their families for their contributions.

Rabbi Shemtov, head of the camp and organizer of the Yarchei Kallah, said the seed idea was planted by Rabbi Moshe Wolberg, a Rosh Yeshiva in Manchester who spent many summers teaching and guiding staff in camp, and thanked camp director Rabbi Yossi Futerfas to ably bringing it into fruition.

It seemed like an appropriate location for the rabbis to continue their learning that began early on Thursday morning with a shiur chassidus and followed in a tent on the lawn of the camp.

In its 45th year, Yarchei Kallah was founded to honor the yartzeit of Rabbi Levi Yitzchak Schneerson, father of the Rebbe and one of the greatest Talmudic and Kabbalistic scholars of his time.

“I have much affection for that initiative,” the Rebbe commented about this conference, explaining that “it conforms to my obligation to honor my father (during his lifetime and) in the afterlife, and the best way to show honor is by Torah study.”

The Rebbe was referring to a discussion among rabbinic sources on whether the Commandment of “Honor your father and mother” applied only for living parents or even also after their death.

The conclusion is that the honor must be bestowed even after their lifetime. The Zohar, the basic text of Kabbalah, further teaches a way to honor a parent who passed away is through the study of Torah.

The Yarchei Kallah is sponsored by Ari Ben Rochel.

The gathering will culminate with a Grand Melave Malka on Motzoei Shabbos, 10:30 PM, at the Main Shul of the camp. Open for the pubic, with a program for men and women, the event will feature speeches by the Rebbe’s Choizer, Rabbi Yoel Kahn; Rabbi Shemtov and Rabbi Wolberg. I can totally relate.

The good news is that imminently Moshiach will redeem us and Reb Meylich will be back and he’ll say L’chaim, dance on the tables (19 Kislev style) and he’ll proclaim (in yiddish): “Si Goot”….

May it happen before this Shabbos. Amen.

A couple of yards North of the “Baal Shemtov” going towards “Siberia”….across from the

What a chossid! What a giant! Loved seeing these pictures, especially of Rabbi Kalmenson davening

Can videos of the shiurim be posted.
Thanks

Where in camps grounds is this new zal located?