Devorah Bukiet decided to quit the grueling party planning business after her son’s Bar Mitzvah. Covid sped up the process, leading her to repurpose all the props she collected for 10 years for a gemach she and an anonymous donor opened. Full Story, Photos Devorah Bukiet decided to quit the grueling party planning business after her son’s Bar Mitzvah. Covid sped up the process, leading her to repurpose all the props she collected for 10 years for a gemach she and an anonymous donor opened. Full Story, Photos

Devorah Bukiet, an entrepreneur from Crown Heights who founded the Belle Events party planning business 10 years ago, has closed one career door – but opened another.

Her new project, a gemach which provides props for simchas and events for rent, will be of assistance to the community.

The busy wife and mother originally trained as an interior designer, which she had been passionate about since she was a child.

“Interior design made sense as I had already been fond of the topic, often re-imagining my childhood home as I would have designed it and similarly with other homes that I’d been to. Furthermore, it felt flexible enough for me to be available in my future home,” Bukiet told COLlive.

After landing a few clients though, Bukiet says she was unhappy with the lack of creativity of the clientele. “The recurring theme I heard time after time was how they liked what their neighbor had done and wanted to do the same,” she says.

“Shortly after a couple of the projects, I decided this wouldn’t work. I felt that it was a waste of my skills and talents and a waste of their time and money, when they could simply call their neighbor and ask them where they got it and do the same.”

And so, she veered into event planning, and her business took off. Bukiet soon became an in-demand planner, and spent her days and nights creating beautiful events and Simches in the New York area and beyond.

“Over the past decade, I was blessed to have had my clients hand-picked by Hashem,” Bukiet says. “We worked well together and so many of these beautiful families became real life-long friendships. I would do a bris for one sibling, to an upshern to a bar/bas mitzvah for another sibling, and it was an honor to keep being called back to celebrate with them.”

In the past few years, Bukiet says she began to realize that in order to devote herself fully to her growing family, she would need to step back from the grueling work schedule she was holding down.

“When my kids were little, any care would do,” Bukiet says. “A nanny, siblings, playgroups… but as they grow older and become emotionally needier, they actually needed their own mother. It proved more and more difficult to be disappearing for hours and days, on top of the full hours working at home as well. I was running on fumes and they were all becoming the sacrifices of my choices. It wasn’t fair and it wasn’t healthy and so with Hashem’s help, He gave me the wisdom to see that something had to change.”

So she made the decision to work until her son’s bar mitzvah in March of 2021, and that would be her 10-year celebration, after which she would begin to scale back.

But then, the Covid-19 pandemic broke out.

“After Covid hit, we were forced to be home. Events got canceled and postponed indefinitely and I found myself at home, with my kids, at peace. Nowhere to be, nothing to think about except for whatever was happening at the moment. I was getting a real taste of what I would soon be able to make happen in my home, and I loved it. This is not to say I wasn’t saddened by those getting ill or those dying, it was about my personal Aha moment,” she explains.

In a funny twist, Bukiet says she has begun getting calls for interior design again just as she begins the next chapter.

After a decade in the event planning business, Bukiet says she is not willing to give it all up.

She has now opened Belle Events 2.0, a prop gemach, offering her event props for free rental.

“Over the years, people have called and couldn’t afford my services and I thought, how special would it be for everyone to feel like their event is adorned just a little more than they could have dreamed,” she says.

“Additionally, the idea felt like a way to give back to the community, in the merit that we should always be able to celebrate. Sadly, it has been a grueling year of tragic loss but also, particularly understanding the difficulties in the shidduchim world, this felt like a way to emphasize the simchos, with prayers for continued celebrations.”

An anonymous sponsor offered to team up and cover the monthly rent of the garage storage rental. For now, the gemach will function for one year, and Bukiet says if it is successful, hopefully for longer.

The feedback about the new gemach has been great, Bukiet says.

“I have already been in touch with 10 people about their upcoming and very immediate events, for which we have been able to provide an assortment of props. I also wanted to be able to use the experience and expertise I gained during the event decade to guide them with what could work. I feel honored and blessed that Hashem led me to the idea and the right people so quickly, to make this a reality.”

Contact:
Devorah 718-812-5044 via message or WhatsApp to inquire about the items we have. Please note, this is a free gemach with a refundable $25 incidentals fee. 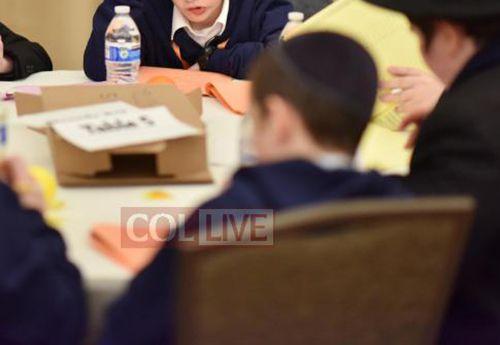 But what does ‘free rental’ mean?

This is truly amazing.You will bring so much simcha to so many others…

4
0
Reply
Thank you so much

Really Appreciate the good work you do!

Wishing you success and fulfillment in your next chapter. I’m glad our paths got to cross.
Ira

Just speaking to her, made me realize what a special person she is; along with her siblings, nice and talented.

Devorah, much hatzlacha! Incredible resource for the community.

Her kids will love her for this decision. May you be blessed with only Nachas from your family. Your brave and smart .

Especially appreciate the aesthetic guidance Devorah is willing to share with those that come to borrow the props. Many of us recognize beauty when we see it but are not blessed with Devorah’s talent to execute such ideas correctly. This help will really be the cherry on top for so many baalei simcha looking to beautify their event. Why, I know women who won’t even share their best recipes, let alone offer ideas on how to make them work maximally.