The inaugural event of the newly-formed Batsheva organization has brought together 500 impactful Jewish women from across the globe in a positive and upbeat display of female empowerment.

Held at the luxurious landmark Plaza Hotel in Manhattan, the organization honored an array of women who are making a difference in their communities and the world, in the areas of business, science and the arts.

Sarah Rotenstreich, Director of Chabad Preschool of the Arts, noted that the organization is also named after the biblical Batsheva, wife of King David and mother of King Solomon, “who united the Jewish people and reigned over one the most venerated eras of peace and tranquility in Jewish history, representing royalty, wisdom, grace, leadership, and overcoming challenges.”

While directing a successful preschool in New York City, Sarah Rotenstreich said, she has come to realize “the amazing strength of today’s women, juggling everything from the boardroom to home responsibilities.”

“This is the time, women are rising in strength everywhere, and the response to the organization has been incredible,” Rotenstreich told COLlive.com, noting that “the long-term goal is to establish Batsheva in every major city in the world.”

The goal of Batsheva is two-fold, Rotenstreich explains. “On the spiritual front, we are creating a platform by bringing in the most thoughtful, spiritual thinkers of our time and sharing the depth of Judaism in a very meaningful way, which can relate to the most successful women of today.

“Our other message is that if a woman chooses to be a career woman, there should be no limitations to where she can reach,” Rotenstreich said. “We are finding that many women are somehow limited from going all the way to the top, so our mission is to connect with fortune 500 companies, and to bring to them the most qualified and successful women, who are just as, or perhaps more, successful than their C-level executives. We plan to put a spotlight on major companies, unfortunately, there are still many who do not have women on their boards and at the highest corporate levels.”

Chagit Sofiev-Leviev, President of Leviev USA, which oversees its extensive diamond and jewelry operations in the US, was presented with the CEO leadership award, for her achievements as a Jewish woman in the corporate world.

“Women empowerment is something close to my heart,” Leviev told COLlive.com. “I was given opportunities in my life, and this organization was established to help women that want to be empowered and progress in life, to meet the right people that can give them the extra push – women they can look up to, women that can inspire them and help them grow.”

Looking around the room, Leviev said: “There are so many successful Jewish women, just in this room alone, and this organization helps to bring them all together to inspire other women.”

The keynote speech was given by Israel’s Minister for Social Equality Gila Gamliel, who praised Chabad for being at the forefront of Jewish women’s education.

Gamliel pointed out that the first organization the Rebbe set up was for Nshei Chabad – women of Chabad, “emphasizing the strength and the power of the Jewish woman all over the world,” she said.

“The inclusiveness and openness of Chabad to every Jew without any concern for one’s level of religion, is something truly amazing. This welcoming attitude taken by Chabad is work for Am Yisrael. Wherever I travel in the world, I always look for the Beit Chabad, and in every country, I find a warm and Jewish home that makes me feel right at home,” Gamliel said.

Gamliel related how her own relationship with Chabad goes back many years. Some years ago, when Gamliel was visiting New York, she visited the Ohel gravesite of the Rebbe in Queens, she said.

Later that day, while out shopping in New York City, she received some dollar bills as change. To her surprise, one of the bills was a dollar from the Lubavitcher Rebbe, given to an individual who had written his name and the date he received the dollar on the top. Gamliel had kept the dollar, and felt that it brought her great blessings in her life and career.

Years later, she said, while visiting the Chabad Shul in St. Petersburg, Russia, she related to the Chabad Rabbi that she had a dollar from the Rebbe, and showed it to him. Looking at the name on the top of the dollar, the Shliach said he knew who the owner was, that it was a childhood friend of his, a fellow Chabad Rabbi in Israel.

Through the Shliach, Gamliel was soon introduced to the Israeli Rabbi who not only agreed to allow her to keep the dollar, but gifted another one to her husband as well. A gesture, Gamliel said, “she will never forget.”

Nancy Brinker, founder of the Susan G. Komen Foundation and former U.S. Ambassador to Hungary, received the Woman of Valor award for her tireless fight against breast cancer, raising almost 3 billion dollars for research, education and aid to women. Brinker paid tribute to her sister, Susan G. Komen, who died in 1980 of breast cancer.

“We created a movement in the days when we had no computers, no digital world, just phones and a will to grow an organization as a grassroots movement around the world, to make every woman aware, and every scientist and physician in the world aware, that it is their responsibility to help in this fight,” Brinker said.

The event also included a panel including actresses Rona-Lee Shim’on and Margarita Levieva, as well as a spirited fashion show exhibiting women fashion designers from Israel led by Kim Heyman, a fashion entrepreneur and Brand Ambassador for fashion’s emerging talents both in Tel Aviv and New York.

Adi Heyman, a fashion influencer and supporter of Jewish causes, received the Entrepreneur Award for her impact on the modest fashion industry. She said she was thrilled to be a part of Batsheva, being initially attracted to “the mission of positivity, empowerment and foresight.”

“Working in fashion, it’s something I thrive on and take inspiration from, so there’s kind of a beautiful synthesis working with them. The camaraderie, power and energy that exists when you get a group of 500 women together, unified by their religion, heritage and belief…the sky’s the limit,” Heyman said. 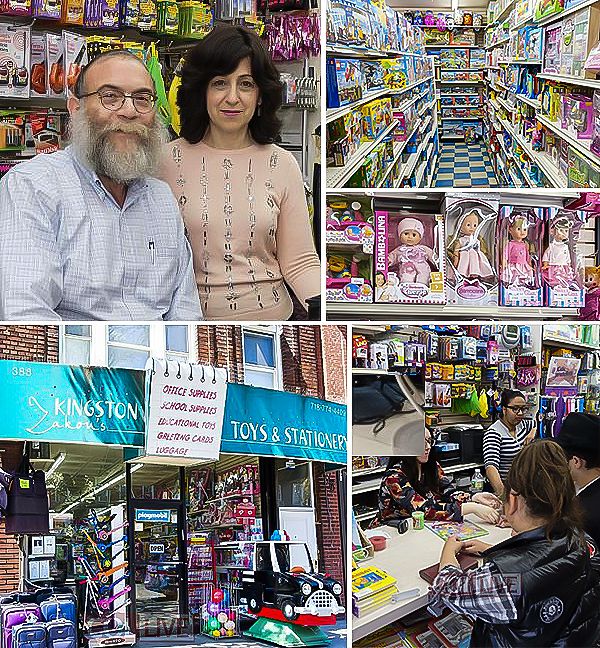 Toys ‘R’ Us Out, Kingston Toys In

on youtube under “womens liberation” there is a rebbe video regarding the role of a jewish women.

Thank you ! I too left a career after I got married and did not want to compromise for my kids.

As a BT I loved my career. I lived for it. The hardest thing I ever gave up was the thrill of a boardroom. I was raised by a mother with a career. Most of the women in my family are very powerful and influential in the secular world, from fashion, medicine to accomplished concert pianists. I know my capabilities. I CHOSE to stay home with my children when I became religious. This was a huge sacrifice since it was not in my nature. I started to think I am already so accomplished, so creative, so intelligent, why would I… Read more »

Other than praise, what is the practical application of this get together? Is there a process to help young women start businesses, or some other practical help?
thanks

So is the purpose of this meeting to bring the Geula? It would be so amazing if these 500 powerful women were empowered with spreading the beautiful 3 Mitzvos given to women! Imagine their sphere of influence And their using it the way the Torah wants! You can change the world! Go for it Batsheva!

Thank you reuben. I was looking at these pics feeling ( fleetingly ) envious and unfulfilled as i chose to be a stay at home mom. I can honestly say i chose the more difficult route in life . Being home is a lot harder . Its taken a toll on my health, appearance in addition to the sheer loneliness of it and sometimes boredom but from very young i knew i had been blessed with challenging kids . They are super intelligent , hugely talented , complex with huge personalities . I knew from very early on that keeping… Read more »

Well said. Very important to remember that this is priority number 1 for jewish women.

Impressive!And very glamorous! Kol hakavod to those who are in this category. By the same token please note not all women are cut out for business and they remain in the background unassuming dedicated simple and very hard working. They may have small jobs but are giants in raising our future with stability and being satisfied in the not so glam lifestyle. Somehow an article like this can chas Sholom make a mother and housewife being the biggest largest glamorous career lady of all feel less then… unfulfilled…. or disillusioned and feel she’s not successful! To those moms Be strong… Read more »

it is a great idea to praise the accomplishments of women in the buisnes world. at the same time we must give praise and honor to those women who have chosen to be career homemakers who work twenty four seven bring up generations of proud jews who will light up the world with torah and mitzvods

Sori, you are a powerhouse ka”h!!! So proud of your accomplishments.
CK -L.I.