What Are The Effects of Bullying? Is it Really That Bad?

Dr. Rona Novick discusses with Operation Survival the harmful effects of bullying and why bullying is worse than ever and even deadly. Full Story, Video Dr. Rona Novick discusses with Operation Survival the harmful effects of bullying and why bullying is worse than ever and even deadly. Full Story, Video

Bullying is devastating for those who experience it, and it is extremely unpleasant for those who witness it as well. Bullying doesn’t just impact the lives of victims and the bullies themselves, but it also affects those who see it happen in the school or the community.

Imagine if every day when you went to work there was a strong possibility that one of your colleagues was going to be brutally teased, socially excluded, or embarrassed. It wouldn’t be an easy place to function. How can we expect children to learn if our school environments are rife with the feeling that at any moment somebody could be a victim in a similar situation?

Bullying has become a serious and widespread problem. It has become so much worse with the increased accessibility of information and communication methods. In the past, bullying was a school-day phenomenon. No matter how bad they were treated in school, at the end of the day, at least the victim went home to a place of safety. The school day was over so the torment was finished. But now, the torment follows victims on their phones and other devices. It shows up in WhatsApp groups and social media messages.

This has led victims to feel as if there is no escape, and in some heartbreaking instances, it has led to the suicide of young people who, instead of feeling loved and valued in the world, are experiencing a life of torment.

The impact on victims is devastating, both in the moment and years later. Research suggests that victims carry the scars of this abuse well into their adulthood. It is so important that we address bullying in our schools and communities. We must raise a generation of upstanding bystanders. We need a generation that knows that when they see bullying—not as the bully or the victim, but as a witness— they have the power to make a difference and possibly save someone’s life.

Bullying is not a problem that will go away or improve by ignoring it. Bullying will only be reduced or eliminated when parents and educators take action to prevent bullying and help children understand the need to treat their peers kindly. Children must be taught that their actions matter and that they can make a difference.

Students who experience bullying are twice as likely as non-bullied peers to experience negative health effects such as headaches and stomachaches (Gini & Pozzoli, 2013).

Youth who self-blame and conclude they deserved to be bullied are more likely to face negative outcomes, such as depression, prolonged victimization, and maladjustment (Perren, Ettakal, & Ladd, 2013; Shelley & Craig, 2010).

(Article is based on interview with Dr. Rona Novick for Operation Survival’s Prevention101 series Dr Novick is the Dean of the Azrieli Graduate School of Jewish Education and Administration at Yeshiva University and holds the Raine and Stanley Silverstein Chair in Professional Ethics and Values) 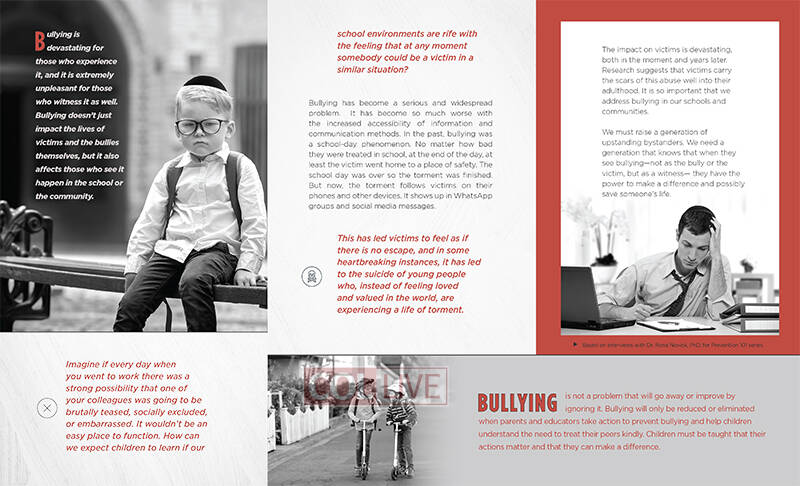 kids need to be taught toughness and self esteem and to not care what people think. these theoretical conferences will not help