Family and friends of the Polonsky family gathered at Chabad of Beachwood, OH, to celebrate the dedication of a new Torah in memory of Shua Polonsky obm. Full Story Family and friends of the Polonsky family gathered at Chabad of Beachwood, OH, to celebrate the dedication of a new Torah in memory of Shua Polonsky obm. Full Story

Family and friends gathered at the Beachwood home of Leonardo and Karen Polonsky on Nov. 24 to add the final otiot, or letter, to a Torah headed to Waxman Chabad Center.

The Torah was donated to the Waxman Chabad Center on South Green Road in Beachwood in memory of Joshua Polonsky, who died Nov. 9, 2017, at age 31, after contracting a stomach virus that caused damage to his heart, liver and kidneys. He was 31.

“Usually, these celebrations are very happy,” said Rabbi Yosef Bialo, who organized the event in honor of Polonsky, his brother-in-law. “There’s no crying, it’s not so emotional, but because it was in honor of someone who we lost at a very young age, it had that sense of emotion, Bialo knows the pain of losing a sibling. His oldest brother, Rabbi Levi Bialo, died in a 2005 train accident in Toronto at age 25.

“And then 13 years later, my wife loses her oldest brother,” Bialo said.

Noting his father-in-law, Leonardo Polonsky, was instrumental in putting together a sefer Torah for his late brother.

On the first anniversary of Polonsky’s death, Bialo said he realized the family “needed that boost” and began making preparations.

“Because I was there, I remember the boost that I needed and I just saw it right there with them,” Bialo explained.

That week, he reached out to family and friends.

“Mel Waxman took it by the horns and he fundraised from the family,” Bialo said. “He didn’t want it to be an outside community project. He wanted to have his family be the ones to support it.”

Addressing those huddled around the Torah on Nov. 24, Druin quoted his father, who is also a sofer.

“He always loved to say, ‘A sofer does not write letters. And this Torah is not a book!’” Druin recounted. “He says, ‘I’ll prove it. When was the last time you picked up a math book, and when you finished reading it, you kissed it? You don’t kiss a math book. How about that novel? When you finish reading it, do you give it a big hug and dance around the room? And yet, what do we do with this Torah? We kiss it, we hug it, we even dance with it. This is not a book and these otiot are not just letters.

In his own words, Druin described the Torah as “our Jewish magic,” adding, “it is because of this Torah that you and me are still here.”

After the Waxman and Polonsky families wrote the final letter of the Torah as one, united family, traditional music began playing from speakers outside and the group made its way to the street.

Outside the house, Polonsky’s cousin, Rich Soclof, said there is no greater joy in the Jewish community than dedicating a Torah.

“On this occasion, dedicating a Torah and combining that with dedicating it in memory of Yehoshua, who was such a tremendous young man, tremendous Jew, and a bright light that burned out too soon,” he said. “There’s no greater tribute than to be able to have this joyous occasion and to merge that with his soul.”

After gathering under and around a gold-fringed canopy with the Torah, the group lit tiki torches before walking from Yehoshua Polonsky’s childhood home on Timberlane Drive to the nearby Waxman Chabad Center, about two-tenths of a mile, where about 300 people gathered to celebrate with the Torah.

“I was so honored to be able to do this for the family, to do this for Yehoshua, but mainly to give the family something that they could actually relate to and be connected to in honor of their brother,” Bialo said. 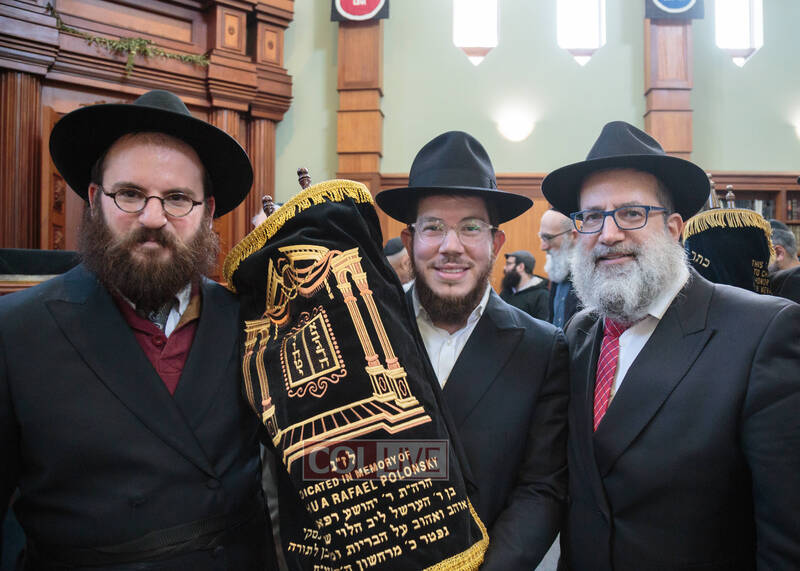 I’m delighted to see your name again! I think about you a lot!

What a special way to honor him. Very well said Rabbi Druin.