A Chasidic Jewish man was beaten by a group of thugs in Crown Heights on Wednesday afternoon. Full Story 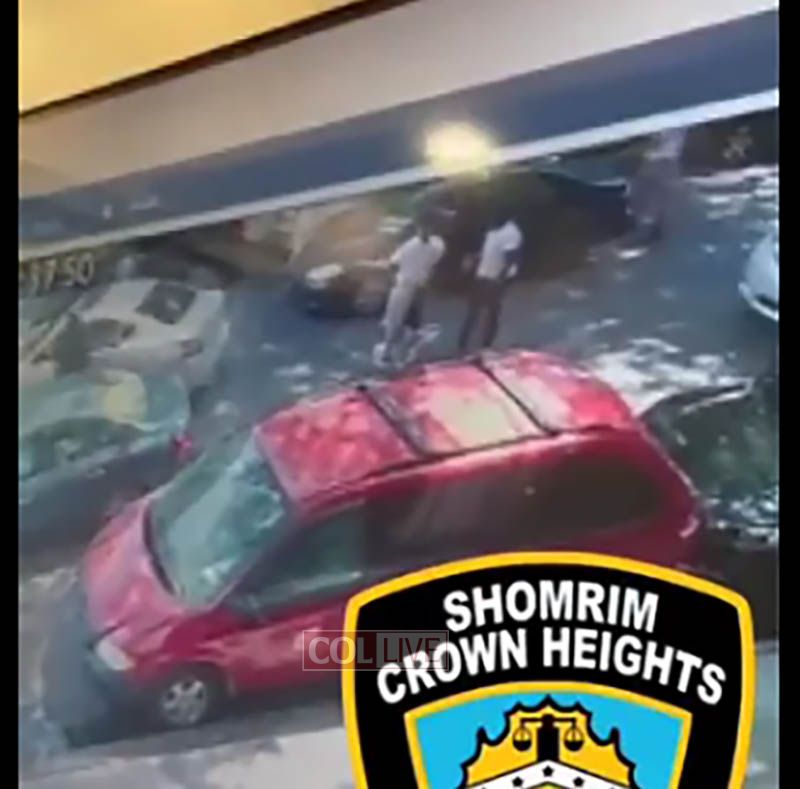 A Chasidic Jewish man was beaten by a group of thugs in Crown Heights on Wednesday afternoon. Full Story

A Chasidic Jewish man was beaten by a group of thugs in Crown Heights on Wednesday afternoon.

The victim, Yosef Hershkop, a community activist in Crown Heights, got into an altercation with the men after his car hit theirs while he was attempting to park his car on Montgomery Street in Crown Heights.

The car’s occupants then followed the Jewish man for another block, and demanded payment for what they claimed was damage to their vehicle.

The thugs then beat the victim, hitting and injuring him in the face, all while his 5-year-old son was in the vehicle. He was transported to the hospital by Hatzalah for treatment.

The police are looking for the silver sedan seen in the surveillance video, and ask that if seen, please call 911 and Shomrim.

Our Volunteers responded to a brutal assault by a few thugs. Despite a fast response the victim was in shock and wasn’t able to give details. Thank you to Hatzalah and @NYPD71Pct for responding. If you see this silver sedan please call 911 and Shomrim . #YourCityYourCall pic.twitter.com/fN0HBOhyV9 Crown heights and NYC in general is a lawless gehenomhole.

If you are walking the streets, be prepared to get beaten, robbed and hopefully not worse and not be able to do a thing!

Even if you dare defend yourself you will be charged and thrown into jail while your attacker disappears into the jungle.

Had this be reversed we wouldn’t hear the end of it. When will these violent animals pay a heavi price for there crimes??? It is outrageous what these criminals get away with and it’s about time we take action and give them a taste of there own medicine/poison because the whole justice system is corrupt and these violent criminals will just be let out if they’re even caught only to continue assaulting Jewish people.

May be time for all the Ch landlords to get rid of the thugs in all the building around the community, it’s a danger which they are complacent in.

It is up to the landlords but they don’t care ! Most of these ppl are on programs and vouchers so they are happy they get their rent in time. They don’t care about the damage these ppl are doing to the community ! Kingston between empire and Lefferts is like walking through a fire zone …..

NYC rental laws are among the toughest in the nation. Believe me, most landlords would be thrilled to be able to “get rid” of bad (low-class) tenants. There are laws against this. Not all of these thugs are on programs. Some live with their families/grandparents and pay very low rent.

5
-1
Reply
So scary… poor little boy and his father

Give faces if they parked there – they live around

Can’t behave with the normal communication styles that differentiate a civilized society from a jungle. And through rarely being arrested or prosecuted they are continually being encouraged to do so. The violence, inhumanity and greed are despicable.

So sorry to hear this. Wishing you a refuah Shaleima!!!

I can’t believe that on our block we have such hideous creatures. May Hashem avenge their blood!

It starts from the top, behaving irresponsible
Heads must roll

High time to call out all landlords who allow these vicious criminals in their buildings due to get funding..yet our people have a hard time funding a place to live

7
-3
Reply
Shelters
Reply to  High time to call out

It’s completely messed up that every adult is not carrying a weapon in this neighborhood. Enough is enough. Fight back. How do you think the Holocaust started? It’s messed up get up and go buy a gun protect yourselves and your neighbors.

Why didn’t he apologize and take their info to cover any damages he might have caused? Not saying the attack was right in any way, just wondering how he would feel if someone did that to his car and drove away.

6
-7
Reply
Because there were no damages
Reply to  Why

Happens all the time that while parking, you bump the car behind or in front of you. It’s at 1/2 a mile per hour;?m no damage is caused, and no civilized person would make anything of it.

Yes, the normal thing to do after a your car touches another car is to get out and speak with the driver. That’s the normal thing to do when dealing with normal people. He clearly sensed that he was not dealing with normal people. And as evidenced by what happened minutes later, he was 100% right. He was dealing with violent, irrational people with no impulse control. Do you think you could have calmed them down by talking to them? This is New York and unfortunately there are people walking the streets who will lash out violently even if you… Read more »

If there were no damages, which happens quite often, he probably apologized and drove off. They saw it as a chance to either try to extort some money out of him and got upset when it didn’t work. I don’t know, I wasn’t there. At the end of the day, there is absolutely no call for such violence, especially in front of a young child!

After all the endorsements from the Jews in crown heights to the this wonderful mayor and you still
Can’t walk the streets safely keep voting for the dems !!!

5
0
Reply
if this was Texas

the perps would no longer be among us…

When the community leaders
endorsed Dinkins, the Goyim,
where I worked were kind
of shocked – “Why would you
endorse Dinkins?!”

When I asked one of the community
leaders this question, the answer was
something like this: “He’s going to win
anyway, so …”

if your are about to be assaulted spray the guy in the face and walk/drive away. it’s the only way to get away unharmed. you cannot talk your way out of situations like these with these animals. Have a pepper spray on you all the time.

Now that NY will need to change its carry and conceal law all should carry a gun in ch and use it if c”v threatened with deadly force and they cannot get away. The time has come to start defending ourselves the government won’t…..