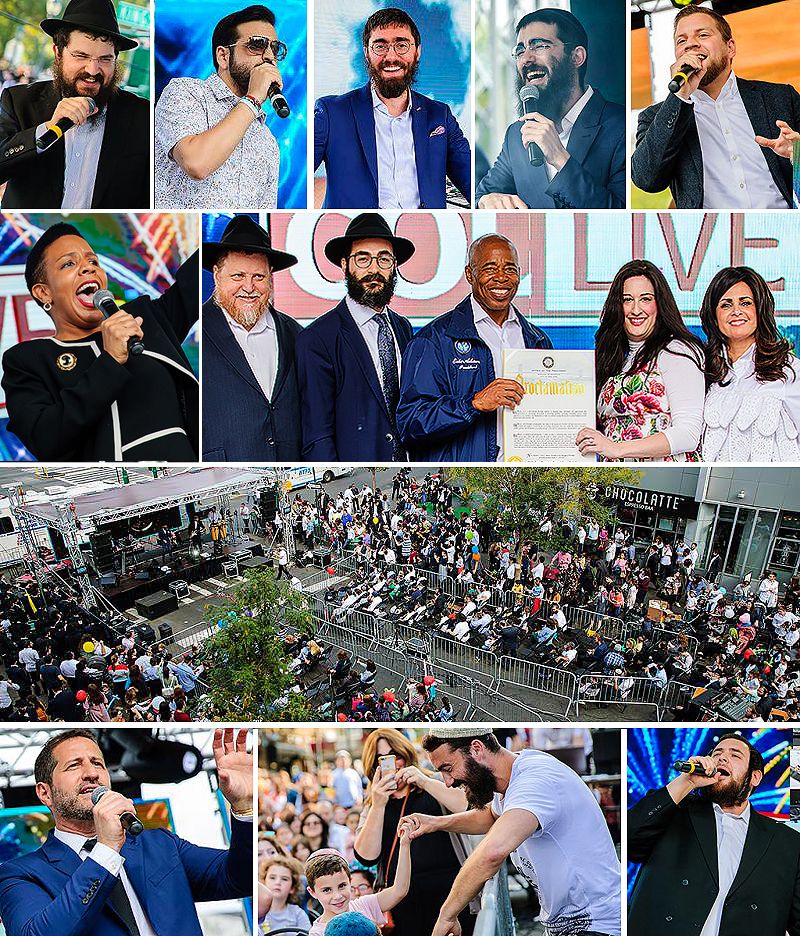 Thousands of people spent a sunny Sunday outdoors in Crown Heights in a joyous and exciting celebration of the 10th anniversary of community news service COLlive.com.

Kingston Avenue between Eastern Parkway and President Street was filled with men, women and children of all ages who reveled at the family fun festival that included bounce houses and free giveaways.

“Happy ten-year anniversary to COLlive,” Brooklyn Borough President Eric Adams said. “It’s great to celebrate with our Jewish community in Crown Heights at a beautiful neighborhood festival. We are One Brooklyn!”

Adams presented a proclamation announcing Sunday, October 7, 2018 as “COLlive Day in the Borough of Brooklyn, New York.” He presented it to Mrs. Mica Soffer, Publisher and Editor in Chief of COLlive.com, and Rabbi Yehuda Ceitlin of COLlive.com.

New York City Council Majority Leader Laurie Cumbo, who represents the Crown Heights neighborhood, presented a citation of honor and proudly praised Mica Soffer for being a leading force in the community and supporter of charitable causes and community institutions.

“When we founded COLlive.com, we had a vision of it becoming the go-to source for news and happenings in Crown Heights and the global Chabad-Lubavitch community,” Mica Soffer said.

“What we didn’t expect is how quickly and warmly the public embraced the website, making it a part of their daily life. We are grateful to Hashem, and our readers, partners and advertisers, for making COLlive.com a household name.”

Following a month packed with holidays, the crowds were excited to celebrate one more time before returning to routine. In addition to residents of Crown Heights, participants included COLlive readers and music fans from around New York and even New Jersey.

The event included a spectacular Jewish music concert produced by event producer Davidi Crombie, with musical arrangement by Chony Milecki and stage and lighting by Mendy Boaron of MLP Lighting and Design.

Social Media Star Meir Kay was on hand adding joy on stage and in the crowd as he was sharing the celebration on Instagram. The concert also featured a live show by the beloved cast of Mitzvah Boulevard and comedy by the renowned entertainer Modi.

A highlight of the event was the world premiere viewing of a new music video for a remake of the 8th Day song “Babenyu”, starring the popular band and featuring the warmth and vitality of the Crown Heights neighborhood and its residents and personalities, produced by Danny Finkelman of Sparks Next Productions. The clip will be officially released in the coming days.

Special thanks to the 71st Precinct, Commanding Officer Inspector Frank Giordano and the Community Affairs Department, Vinny Martinos, for helping to coordinate the event. COL stands for Chabad On Line. It is privately owned and is not a political organization; just reports Chabad happenings around the world. It’s popular because it does a great job rounding up any and all news we would find interesting.Also, often becomes an open forum for people’s thoughts and opinions. In short, it’s an instant go-to for anyone wanting to catch up on the latest happenings in Chabad communities.

What is the meaning of COL? Is the co-existing/living of all residents of Crown Heights? Or just a particular segment of the community. Thank you.

were from la and were in CH on sunday and got to attend this event.. and i was blown away with how beautiful and fun and well run it was! Everything was FREE so it made it such a ahavas yisroel event… everyone just came and enjoyed!

May moshach come already in zchus of this beauiful achdus!

Chony Milecki did the music for all the performers. He did a spectacular job!

Looking forward to seeing the 8th day music video! I hope it gets posted on col soon! 🙂

0
0
Reply
why is the video so blurry?

can we get a nicer video pls

when will the clear video of 8 th day be available on collive? thank you

A wonderful day that was enjoyed by all .
We are all eagerly awaiting your biggest headline : “Moshiach is Here ”
Let it be now IYH

The band was amazing, Music was so good! Who was it?