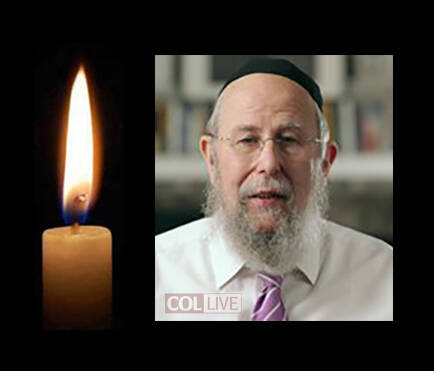 Rabbi Refson studied at Yeshiva Tomchei Temimim Lubavitch of Brunoy, France, and received Smicha at the central Lubavitch Yeshiva in Brooklyn both as a rabbi and as a rabbinical judge.

He led the Shomrei Hadas Synagogue in Leeds, and along with his wife, Ettel served as co-directors of the Leeds Menorah School.

He also held an oversight position regarding the local kosher meat supply.

He is survived by his wife, Ettel, who is the daughter of the chossid Rabbi Yehoshua Raskin, from the head Shochtim of London.

His son, Rabbi Abba Refson, is the Shliach to Ohel Chabad Lubavitch in Queens, NY.

He is also survived by his brother Rabbi Dovid Refson of Yerushalayim.

The Levaya will be taking place tomorrow at midday, time to be confirmed.
at Addas Yisroel Cemetery, Carterhatch Lane, Enfield, Middlesex, EN1 4BG. Physically & Spiritually: Doing the Best We Can Such a special man! what a loss to Leeeds and the UK! may Hashem comfort his wonderful family

Rabbi Abba Refson is a jem of a Chossid so I can only imagine his father… BDE.

Rabbi Refson was a dedicated Shliach & Rav for years in Leeds, together with his wonderful wife.
They created a most beautiful family, all following in their footsteps
What a huge loss to Chabad world-wide and especially the Leeds Kehilla!!

I always davened for the health of Rabbi Abba Refson. Whenever I call the Rebbe’s Ohel out of my need for guidance and a beracha, I always encountered Rabbi Abba’s soothing and calming voice, signalling that everything will be alright.
May Hashem help them in this trying time.

Feeling very sad today. He was a lovely man to know and work for. Sending love to Mrs Refson and all their family.

Rabbi Refson…a Chasssid, Oved Hashem and such a refined and aidel person. Absolutely heart broken to hear this news. The world has lost a special person.

Our condolences to this special family.

Shocked to hear this tragedy and sending sincere condolences to his wife and family. Also to his brother Rabbi Dovid Refson from ירושלים Founder and Head of Nevei Yerushalayim in Israel.
יהי זכרו ברוך

My family joins me in mourning the passing of this truly good, kind and unassuming man. Dayan Refson visited my father’s butcher’s shop on a daily basis as mashgiach, so we must go back about 40+ years. His passing is a huge loss to the entire Kehilla and I can’t imagine anyone filling the void. Leeds will not be the same without his leadership, he revitalized the community. On behalf of my mother and sister, my husband and I send Mrs. Refson and the entire family our condolences. Baruch Dayan HaEmes

So very shocked to hear this.

Sincere condolences to Ettie and all the family.

Rabbi Refson was a dedicated Shliach & Rav for years in Leeds, together with his wonderful wife.
They created a most beautiful family, all following in their footsteps
What a huge loss to Chabad world-wide and especially the Leeds Kehilla!!

all we need is Moshioch!
may all those who are need a speedy recovery, should have a COMPLETE refuah shelaima!

All we need is Moshioch! may all those who need a refuah shelaima have a complete recovery now!!!

I never knew this clearly extraordinary chosid, but personally knowing and having met his children, I can only imagine what a giant this man was. His children, each one, are such yiras shamoyim and simply genuine adele people. May we all know no more sorrow…

We only know our precious Abba Refson from the Ohel and it’s such a warm and sweet person… to hear his voice is the beginning of the Rebbe´s brocha…
When we speak with him we know everything will be good…
We can’t imagine what’s happened …
May Hashem give them the nechama and bring Moshiach!
Chassidim from Paris

So shocked to hear.

Dayan Refson was such a gentle, special chassid who had time and a smile for everyone. The way he and Ettie welcomed our children to Leeds, supported, guided,fed and nurtured them way more than we could have wished for.
May Hashem bring comfort to all the family and bring Moshiach now!

I have fond memories as a very young child, Rabbi Refson would come to learn chasidus with my father at our home where my father ah, was the shliach in Sunderland. His very respectfull and pleasant manner leaves an impact till today..
Nichumim to all the familly.
והקיצו ורננו בקרוב ממש.

B. D. E. SO shocked to hear of Dayan Refson’s demise. Very sad and tragic and certainly a great loss to both his family and the Leeds community and to the larger Jewish community who knew and had contact with him. He was a man of distinction and kindness and may I extend my sincere condolences to the whole family in this time of loss. Hamakom yinachem eschem besoch aveilei tsion verushalayim.

So shocked to hear the, news of the demise of Dayan Refson. A man of distinction and learning. Kind,considerate and insightful. May I extend my condolences to all the family and express the mourners be comforted. Hamakom yinachem oscha betoch aveilei tsion verushalayim.

I’ve only interacted with Abba and wishing him and his family great comfort in this time. Sorry for your loss.

I was shocked to hear about the passing of my dear friend, Rabbi Yehuda Refson whom I learnt together with him in Gateshead Yeshiva, England many years ago! Please send my deepest condolences to his wife and family, also to his brother Rabbi Dovid Refson whom I knew from Gateshead Yeshiva as well! Nachman Levy

So saddened about the terrible news. It was a pleasure to work under his guidance, nothing was ever too much.
Thinking about his wife and beautiful family in this hour of sorrow. May Hashem console you amongst the mourners of Israel.

I am so sorry to hear of Dayan Refson’s passing. I must be his oldest friend. We went to cheder together, same school, learnt our fist page of gemara together, shared our batmitsvahs together all in Sunderland. We shared our homes and life together went to Pirchim camp.
And with virus I cant go to the Levaya.
Thinking of all the family
CyrilBrazil

1
0
Reply
Definition of a Shliach

As a bochur in Gateshead Yeshiva Rabbi Refson זי”ע would drive at night, after our Seder, to bring our small group of 3/4 bochurim, to his home in Sunderland, a 25/30 minute drive each way, to learn Tanya and farhbreng and bring us back, despite his many commitments and young family.
Will never forget it. It left a lifetime impression. The Mesiras Nefesh for toras chassidus and love for a fellow Yid. Was all done discreetly without fanfare, a soldier of the Rebbe fulfilling his duty as a chosid.
והקיצו ורננו בק….המקום ינחם אתכם בתוך שאר אבלי ציון וירושליםרוב ממש.

Dayan Yehuda Refson was a rare breed of person. A devout & dedicated Chossid of the Rebbe ; a talmid chochom with a wonderful depth of knowledge in practical Halacha ; a warm & engaging smile that illuminated all around him with his humility & soft deft touch , coupled with his impeccable English propriety in all his dealings with others . May Hashem provide comfort to all the family .

I was saddened to read this news and wish all the family spread around the world a long life.
I used to walk to Barnes primary school with Julian, and his brother David. Iwas often welcomed into their family home. I have happy childhood memories of not quite doing the right thing , but always lots of fun. I am pleased to read that he grew into a respected Dayan, never would any of the childhood group thought that possible, what a wonderful achievement.
My thoughts are with the family during this sad and most difficult time

Michoel Boruch Dayan Ha’emes. May Hashem give you the strength to deal with this terrible loss. Your father was such a special person. One of a kind. I will forever cherish the memories when I spent a year in Leeds.