From the Gegent: Arele Sheinberger has been serving breakfast in Crown Heights for 30 years. His son Menachem now joins him as well. Full Story, Photos 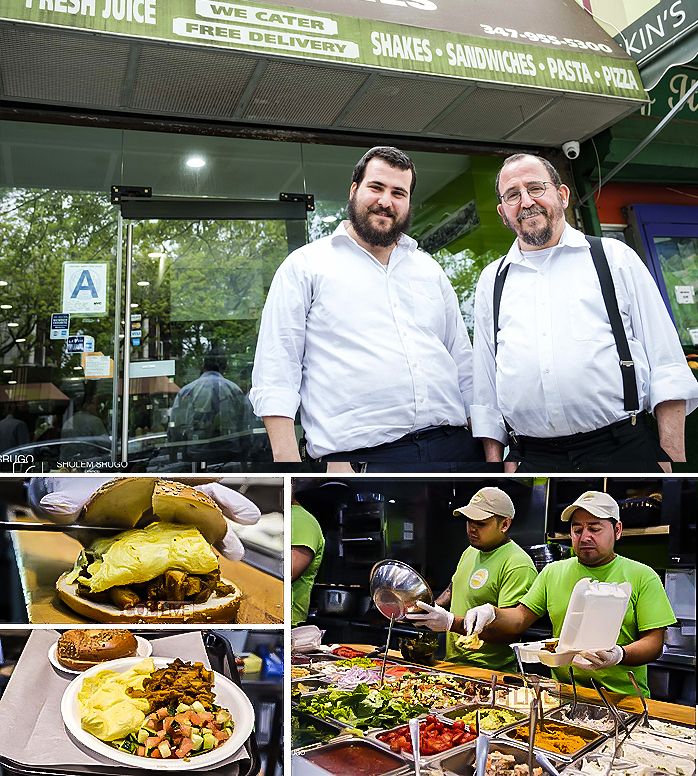 From the Gegent: Arele Sheinberger has been serving breakfast in Crown Heights for 30 years. His son Menachem now joins him as well. Full Story, Photos

‘From the Gegent’ is a series of articles featuring businesses, services and the people behind them in the Crown Heights neighborhood in Brooklyn. Presented by Mica Soffer, owner and publisher of community news service COLlive.com and neighborhood directory gegent.com:
Photos: Sholem Srugo

Holesome Bagels is one of those rare eateries where 3 generations have walked in, ordered a meal, and have been served by the very same person behind the counter – albeit with whiter hair as the years go by.

Arele Sheinberger, 56, has been a fixture at what is known as the “bagel store” at 333 Kingston Avenue for as long as many residents of Brooklyn’s Crown Heights neighborhood can remember.

With a quick smear of cream cheese or butter on your everything bagel and a toss of hash browns with a sunny side up, you have a fresh, hearty meal to go, at a very reasonable price. Whether you are a local heading to work or a visitor hungry after a long flight, breakfast was and still is served all day.

“For many years I worked here, preparing sandwiches myself for many hours every day,” recalls the father of 8 children and now a grandfather of a few more. “I worked from 6 am to 3 pm, while my partner came in from 3 pm to 11 pm. Then at night, I would come in to bake the bagels.”

Originally called “Crown Bagel,” Sheinberger and his former business partner Yankel Baitch purchased the store from its original owner, a Jewish man who was not a resident of the neighborhood. Sheinberger today is proud of the title as “the only Crown Heights restaurant owner who is still the original owner of a Kingston Avenue eatery.”

His son Menachem Sheinberger, 30, joined as a partner in the business in 2013, alongside his pick-up and delivery pizza shop Sauce ‘N Cheese on Albany Avenue.

“After 18 years in the business, the Crown Heights food landscape started to change,” says Menachem, referring to the recent food revolution in the now trendy food destination of Crown Heights. “We started to have some difficulties with keeping up. We knew we had to update and expand the menu. We now have an expanded pasta menu, salad bar, pizza and sandwiches, with many healthier salad choices available.”

They are especially busy catering events such as Brises, Sheva Brachos, business events and birthday parties. They also expanded their menu and established an online presence at holesomebagels.com for pickup or local delivery.

The secret to their longevity, Menachem believes, is their relationship with their customers. “We have our regulars, who all our employees greet by name and know their usual requests, and will whip it up for them as soon as they walk in the door without having to give their order.”

“What people love about the shop is the swift service they get when ordering,” Menachem says. “You can be in and out in a matter of minutes, especially crucial to those rushing to work and school. For those who wish to eat in-house, there are ample tables in the rear of the store,” he says.

Menachem says he is full of respect for his father for the many years he put into the business. “It was a lot of hard work to keep going,” he says. “People from all over the world come in now and tell us they have memories of coming here every morning. Now things are different. We have 4-5 guys doing the same job he did by himself.”

Another thing Menachem points out to his father’s credit is the kindness he has shown to many. “Children would come on their way to school asking how much is this or that. My father would just ask them what they wanted and send them off with a free bagel and potatoes or a cream cheese sandwich. Numerous hungry and needy people would walk away with a full breakfast special after being charged just a dollar or two.”

“It’s the hardest business out there,” Menachem admits. “The amount of customers we deal with on an average day is more than a supermarket. We serve our regular residents running to work, kids rushing to school, bochurim coming in for a quick meal, as well as the thousands of tourists and guests who frequent the neighborhood.

“We are busy until 2:00 pm for breakfast and we are very reasonably priced. An average order is about $7.00 per person, much less than other local eateries. What I love about it is that I feel like we are like in Avraham Avinu’s business – we are welcoming and feeding so many hundreds of people every day. And that is the most rewarding feeling there is,” he says.

After remodeling a few years ago and expanding the menu, Menachem plans to create an event and party room upstairs. “We will be able to host our own small events, such as birthday parties, sheva brachos, corporate events, or even host shluchim groups on premises.”

Yet despite the forward-looking plans for the future, some things on the menu just won’t change, such as their legendary staple “potato bagels”: a bagel sliced in half, with an order of spicy homefries inside.

“Any place I go and in any conversation about the bagel store, people bring up the famous potato bagels,” Menachem says. “A few years ago, we started calling it ‘Arele’s potato bagel’ and we already have 3 generations eating it. It’s been popular for so long.”

As a child, Menachem would take a bagel and homefries from the eatery for his lunch in school. “One day, we had this idea to make a sandwich out of it. It wasn’t on the menu, but a customer once saw it being made for me and asked for it. For years, it became more and more popular, without it even appearing on the menu.”

“The potato bagel homefries recipe is so popular, that during the brief time that we had partners, they tried to change the recipe, and make them a little less spicy,” Menachem recalls. “When my father and I bought them out, we received a petition signed by 300 schoolboys requesting that we switch the recipe back to the original. And so we did.” im almost 40 and i still have this sandwiches

I went to a Bris yesterday that they catered it was AMAZING!!!

I love their coffee!!
And their food is the best in town!

Food is great and service is quick. I think that they could improve the coffee though.

One can’t say a levush is nothing or everything …. that is not what I intended… a person needs all fine qualities and levush to be a chasid like the sheinbergers do .

It means NOTHING!
On the flip side being kind and reliable and baalei chesed is the qualities I appreciate in the Scheinbergers
I was there when it opened for business 30 years ago and the food is still great, the service is fast and the smile is still the same smile

Yum!! Well I started buying it when it was $1.25… now on Shlichus overseas it is greatly missed

I second number 11. Love the white shirts
And the avrohom avinu mentality.

Oh yes and the best part is yummy in my tummy 🙂

You guys are model of chasidim ! In business but still with a chasidishe levush . I’m sad to see most ppl think once the start working they can put on a link shirt.

Obsessed…
Come in the morning and also get a good start of the day from arele:) I do that every morning

The potato bagel is a regular for my day, my children’s day and my husbands day. The service is incredible, and the food is simple yet impeccable. Love that place

It’s incredible on how far they have come for almost 30 years!
I’m in awe, amazing people and kind hearted!
Always put a smile on your face!
Much success for another 30 years!!

I have been coming to the bagel shop for over 25 years, then with my parents, now with my kids, and must say that this is the only CH eatery we love. Simple yet delicious. Great customer service at decent prices, and as pointed out in the write-up, we feel like family here.
Keep it up Sheinbergers!

I am 27 years old and still proudly order a bagel and potato. My co workers can’t understand it, but I love it.

Love the breakfast but the potatoes are way to spicy for me so I don’t go there often. Please make a choice for less spicy potatoes.

Good people, who are genuinely kind and appreciate your business. Always have a quick smile, a good word, and a funny remark.

Keep up the great work and much continued Hatzlacha!

Remember it as warm and welcoming as a 15yo from overseas from tishrei and is still one of the ‘must visits’ when popping into town for a simcha or work 28 years on.

The best bagel shop for bochur!!