From the Gegent: JJ Katz advises new real estate brokers in Brooklyn, but says there's nothing like experience to get the job done right. Full Story, Photos 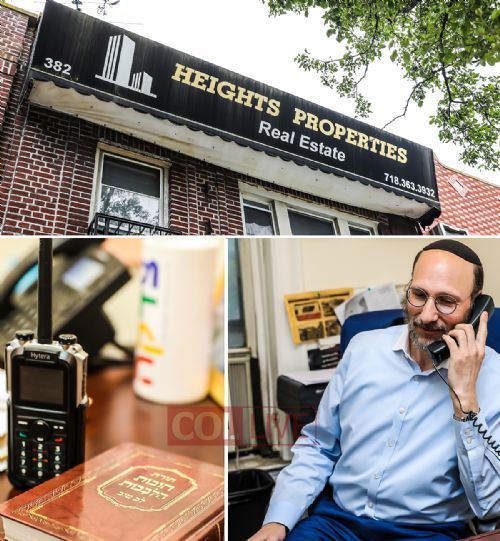 From the Gegent: JJ Katz advises new real estate brokers in Brooklyn, but says there's nothing like experience to get the job done right. Full Story, Photos

‘From the Gegent’ is a series of articles featuring businesses, services and the people behind them in the Crown Heights neighborhood in Brooklyn. Presented by Mica Soffer, owner and publisher of community news service COLlive.com and neighborhood directory gegent.com:
Photos: Mendy Kurant

When JJ Katz first got married, he worked in the food business, designing fancy wedding cakes at an upscale New York bakery. But the husband and father says he always loved meeting new and different types of people.

Soon after his marriage, he decided to try his hand at real estate, joining Eretz Realty in Brooklyn’s Boro Park neighborhood, where he got his real estate license.

A year or two later, he wanted to go out on his own and asked for a bracha from the Rebbe via the Igros Kodesh. “The answer that I received said that I should deal with Jewish homes with Kosher kitchens,” Katz says. “And I’ve been doing that ever since.”

Helping Jewish couples and families find homes became his first priority, and something he lives with until today, nearly 20 years later.

His first account was a large building on Lefferts Avenue near Albany Avenue, which was owned by a friend of his who lived outside the neighborhood. “I convinced him to fix up the apartments and rent them out to young Lubavitch couples,” Katz says. “In those days, one bedroom apartments were going for $600 to $650 per month and a two bedroom was $800.”

His friend took his advice, and Katz became the broker for that building. “That building had never had any Jewish residents up until then, and now it is probably 50 percent Jewish,” he says. “That deal really put me in the Crown Heights market.”

Katz still vividly recalls his first home sale, which was also on Lefferts Avenue. “20 years ago, no one wanted to live on Lefferts Avenue, they didn’t want to buy past Empire Boulevard, which was considered the edge of Crown Heights. It was a hard sell, but eventually I did it,” he says.

Katz also had a hand in the sale of many of the neighborhood’s development properties, many of which led to the construction of condo buildings for local Jewish families. “My bracha was to sell Yiddishe homes, and so it’s very important to me, that’s what I try to focus on,” he says.

Nowadays, with the real estate field becoming a popular choice for many young entrepreneurs, there is a lot more competition. But he says it doesn’t worry him since he is always conscious of the fact that livelihood comes from Hashem.

At his office on Kingston Avenue, his favorite Seforim which he tries to learn from daily are “Shaar Emunah and Bitachon” and “Lmaan Tatzliach,” both of which remind him of that. His business card has a page from the Hayom Yom about parnassah printed on it as well.

“Thank G-d, despite the competition, I continue to have many new and loyal longtime customers who appreciate my experience and professional way of doing business,” he says.

His experience and expertise keeps new and former clients calling.

“The fact that I have so much experience in the business really makes a difference, especially when people come to me after they’ve hired other brokers or agencies. I always tell them, let’s figure out what went wrong, and how we can do better,” he says.

“How was it advertised? At what price was it advertised? Pricing is probably the most important aspects of selling or renting something, and it takes expertise and knowledge to come up with the perfect price. The owner should get what he deserves, but the price can’t be unrealistic, because you will damage the value of the property. It will sit on the market longer and it becomes stale, and the offers will end up much less than you could’ve gotten for the property.

“With me, you are dealing with someone who’s been around, and has seen problems that can and will come up during the sale or purchase of a property, and knows how to handle these things. Experience is a very important factor. For someone like myself, that has been in business for almost 19 years and most of my business here in the community, that says a lot about me,” Katz says.

“Especially now, with hundreds of brokers around, and I am still in the business, people are still calling me because they want to work with me, it’s all about a name that they trust.”

It’s all about the service, Katz adds.

“People are looking for someone who is honest, and is polite – someone calling me up for a rental and can barely make ends meet and is looking for the cheapest option, or someone else who is calling for a 10 million dollar shopping center, they each get the same respect and treatment. The million dollar client might be taken out for a nice lunch,” he jokes, “but they are both getting my time and respect. Both clients are important.”

To those who ask advice on buying a home in Crown Heights, Katz says location is the key.

“I don’t recommend to anyone whether they should wait to buy, because I can’t predict the future. Realistically, housing prices are all about supply and demand, and demand remains high in the neighborhood.

“What I do say, is if you’re ready to buy and you have the money, go for it, why continue to pay rent to someone else,” he says.

“As far as affordability, for those that want to stay in Crown Heights, south of Empire Boulevard, towards the hospital, is an affordable option. There are over 40 families who have already moved to that area.”

Katz also gives advice to new brokers just starting out in the field.

“I always say, you have to invest to get back. Like any other business, you expect to invest money for the first year, maybe even longer, and don’t expect any return for a while. Real estate is no different, except you are investing time and effort, and time is money. Anyone who makes money in the first year or right away, look at it as a bonus,” he says.

Being the “people person” that he is, Katz has also been a member of the Crown Heights Hatzalah volunteer ambulance service for 24 years.

“One of the reasons I got into real estate is because I love meeting new and different types of people, and being in Hatzalah, you get the merit to help strangers, which is a very good feeling,” he says.

With an office overlooking Kingston Avenue, Katz is conveniently located in the center of the neighborhood, giving him the opportunity to help as many people as possible.

“There were many times I’ve had to hang up on an important phone call, to run and help in an emergency. But that never caused any problems with my business, I find that Hashem has a way of compensating for doing good,” he says.

Gegent.com is a unique and highly informative directory of community businesses and services to help consumers’ daily activities and needs. Click here to add your business now. so aidele and fine and doing everthing the rebbe told him to do. finding homes and working with kosher Kitchens. he also find you the best price for your home…!!! even if it means going the extra mile. and he enjoys his so well deserved parnossa the REBBE IS SOOO PROUD OF EVERYTHING HE DOES FOR OUR COMMUNITY!!!! HE EVEN always goes out of his way before he sells the house to ask all the NEIGBOURS and TENANTS if they want to buy it first!!! always as it says in Halocha , the aidelest yungerman , and that is why… Read more »

JJ Katz is a rare find! He is the definition of an all around mentsch. A pleasure to deal with and head on straight. WIshing him only much continued Hatzlacha!!

In areas that sorround crown heights around prospect park would be smart to put Chinese Or hipsters. It will make crown heights safer. We did it in Boro park. Today you have 150 thousand Chinese all along eight ave border through Bensonhurst. Check it out. These borders were high crime druggie Hispanic areas. Then turned palestinians. Then the Chinese made Boro park safe. They are family oriented. Bring in a hundred thousand chinese around crown heights and Jews will see a major drop in crime. Be smart. Israel must do the same thing. Bring in Chinese construction workers,hospital staff and… Read more »

2
0
Reply
From an old canp friend

JJ is the best!
TLS forever!!

Last year when we came in from Australia, JJ said Sholem Aleichem to me, whilst I was crossing Kingston Av. I casually told him that if anything becomes available in a certain apartment building that we liked on Eastern Parkway, I would appreciate it, if he would let me know.
Within a day or 2 , he had found one, we inspected it and
purchased it.
It was a pleasure dealing with JJ and everything that he told us was accurate. Seeing that he is a member of Hatzolah only made us further inclined to deal with him.

a erliche fine yid, JJ has fine qualities..devoted to hatzolah…
im jealous of his brownie points.

Great article for a great person. His wife and children are great as well. Continued success with the ultimate of Gezunt and Nachas.

Please please don’t ever forget what the rebbe told you . Too many ppl are making it easy for the hipsters to come here . Our children and our future need your help !!!

He is such an honest and inspiring person!
I would give him a *****(five stars) great broker and person!

JJ sold us our house and many years later sold it for us when we moved!

BS”D with a name J.J.,could one go wrong