Anat Hazan is a Sheitel Maven on a Mission

From the Gegent: When a woman sits down in the salon of Anat Hazan in Crown Heights, it is more than just a beautiful sheitel that she is walking out with. The author of "The Sheitel Advantage" says change can begin from the outside. Full Story 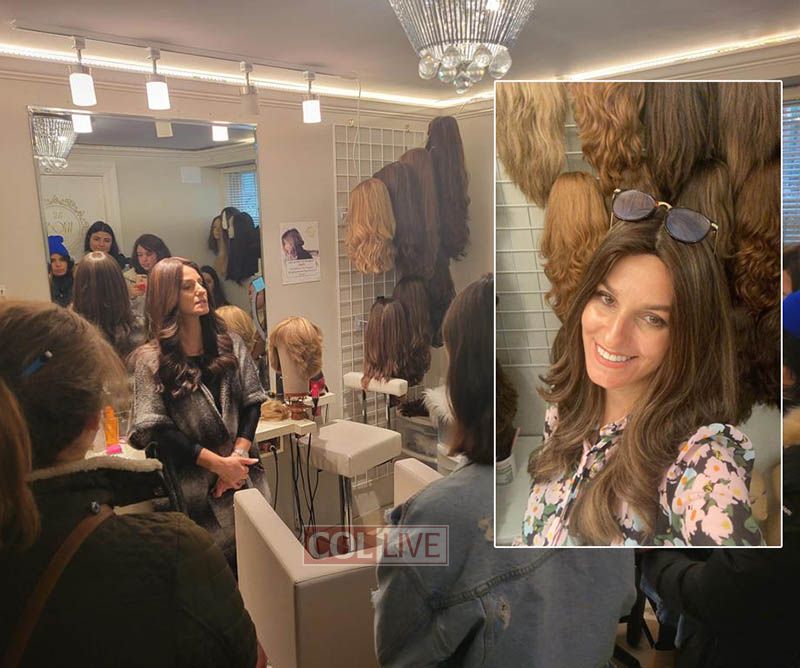 From the Gegent: When a woman sits down in the salon of Anat Hazan in Crown Heights, it is more than just a beautiful sheitel that she is walking out with. The author of "The Sheitel Advantage" says change can begin from the outside. Full Story

Anat Hazan is a wig stylist, writer, therapist, and more. As any woman who sits down in her salon in Crown Heights can see, she was practically born with a scissor in hand.

As a child, young Hazan flipped through magazines with photos and articles about her father, Meir Elkayam, one of Israel’s first mens hairstylists.

“My mother was pregnant with her first child,” says Hazan. “She was scheduled to go to a hairstyle class but was feeling too sick to go. So she turned to my father. ‘You go instead of me,’ she said.”

Elkayam, who had never picked up a hair dryer, was shocked. “Me?” he asked.

So, at his wife’s bidding, the young Elkayam attended the stylist course. Over time, it was clear that he possessed a special talent. He far surpassed his peers, becoming one of the top hair stylists in Israel.

Elkayam worked with British Jewish hairstylist Vidal Sassoon for forty-five years and was sent to world competitions for the Wella brand shampoo.

He was also a talented tailor who customized wedding dresses. “People used to plan their weddings based on the dates that my father was available,” Hazan says. Elkayam staged performances for companies including Lancome and Shiseido, and taught classes in Greece, Holland, Italy, France, and Israel.

“All the famous actors and singers came to my dad,” Hazan says. “I’m proud of him.”

When she was old enough, Hazan began working on her friends’ hair. Then, she took a wig course at Yaffa Salon. She began working out of her home and eventually built up a salon of her own in Brooklyn. Thirty years later, Hazan is still loving every moment of it.

Hazan is known for the loving touch and personal attention she gives to each woman. “I learn so much from each of them,” she says. She fits styles and cuts to each individual face and personality.

Her salon is open to girls and kallahs, as well. From mother to daughter, generations of women have sat in Hazan’s chair, receiving the latest styling techniques and a patient listening ear.

Women understand that a new look has the power to impact many areas of life. “A woman told me she wanted a raise at work but didn’t know how to ask for it,” Hazan recalls. Hazan gave her a short, trendy cut that exuded confidence. Two months later, the woman came back to the studio. “I got the raise!” she told Hazan. Stories like this lift Hazan’s heart.

Then, there was the woman who told Hazan that she felt down on her life. Hazan gave her a wig that suited her so well, the woman began to dress better to go with the wig. She began taking better care of herself, and her mood lifted until she finally was happy and at peace with herself and her life.

“Changing your sheitel changes the inside, as well,” Hazan says. With this belief, Hazan wrote the famous booklet “The Sheitel Advantage,” which compiles teachings about covering hair from the Rebbe’s letters in Igros Kodesh and stories. An index guides the reader to the source of each topic.

She dedicated The Sheitel Advantage, which can be found in all Judaica stores, in memory of her mother, Elvira Chaya Mushka bas Avraham. “The mitzvah of covering hair was dear to her,” Hazan says. “She covered her hair until the last minute of her life.”

The Sheitel Advantage, originally titled in Hebrew Maalat Hapeah, helped Jewish women all over the world fulfill this meaningful mitzvah. It was published in Hebrew and English, and many Jewish girls’ schools use it as a part of their curriculum.

Hazan shares many stories where people she knows were able to receive miracles after covering their hair. She recalls one married woman who didn’t wear a wig because she never found one she looked good in. “Try one on me, and you will see,” the woman said. As Hazan looked through her wig selection for the perfect style, the woman mentioned that she had never had a child, but wished to be blessed with children.

“You never know. It may be one thing and then Hashem will shower you with blessings,” Hazan said.

Finally, Hazan found the wig. It was a straight pony sheitel. The woman tried it on and looked in the mirror, shocked. She looked radiant! Right then, the woman decided to wear the wig every day.

A few months later, Hazan received a phone call. The woman had called to say that she was finally pregnant!  She called to shower Hazan with blessings because she was sure that covering her hair was a big part of the miracle.

Hazan recalls the young German woman who was filming a documentary about Judaism. She explained that her mother was sick, so she wanted to learn more about being Jewish. She visited a wig salon because she was especially touched by a booklet she read called “The Sheitel Advantage.”

The woman was blown away when Hazan told her that she was none other than the author of the book! “You are the reason I’m here!” said the young lady. At Hazan’s suggestion, the lady eventually went on to learn at Machon Chana.

Hazan stays on the cutting-edge of wig styling. Her care for each woman shines through with each snip of her scissors.

“I love to give confidence to every Jewish woman and girl so she can go out with pride, modesty, and be a gorgeous presentable Jewish woman and be the highest version of herself inside out.”

Her salon is open for all styling needs, including all sizes, and services like dying and highlighting. She sells every type of wig including a gorgeous array of lace top wigs. So funny- my husband just said “your friend Anat” is on Collive! So I met Anat because i bought both my sheitels from her- and both required multiple visits. She took care of everything with so much patience, grace, and humor
Anat truly became a friend! So grateful 🙏

Anat is the nicest person to Deal with! I came in with a very low budget for a sheitel and she had so much patience and found a wig on sale for me and treated me so well , even though I was buying a cheap sheitel. She is a sweetheart!

I went to Anat just twice and my daughter from overseas as well and I found that she does beautiful work on hair.
Besides her hairstyle works she is recommended for how kind and patient she is. A truly elegant and unique person.

So proud of you!!

0
0
Reply
Being around her smile and positivity is golden

Excellent at what she does but mostly what she does is bring out the inner beauty and makes the woman feel radiant. Whether it’s a sheitel or even cutting a young girl’s hair I’ve seen the girl person transform. Anat is awesome!

I agree with all the comments.
She is so nice to deal With. Will not let you go until you are satisfied. She keeps up with the latest trends in cutting and designs your shaitel to your face. Anat is very talented.She also became a friend.

Because of this article and the comments, I took a chance and came to CH even though I live in Monsey..B”H Anat truly is as wonderful, professional, caring, and patient as everyone said! Even though I was only in CH for a few hours, she gave me all the time I needed to help me choose a sheitel and then to cut and style it..And the price was terrific too, which I so appreciated! Would definitely recommend Anat to anyone who needs a new sheitel, young or old, or who needs expert advice regardingtheir old one!!

Anat is the best stylist in CH. No one else can compare to her in the cut and style department. It seems she has achieved what many other shaitel machers only dream of: the ability to see what the hair wants to be and cut/style it according to its nature. This goes for cutting natural hair and styling shaitels. Her prices are competitive, but it worthwhile as she only provides top quality service and shaitels.

It’s so nice to deal with this so place! And they have very good stylists!

I was hoping that Anat would contact me about buying a new sheitel. I don’t have mine anymore but need the help and patience to try a new sheitel that would be within my budget and that it would not take so much in upkeep. Thank you. I have been wearing headcoverings and shaving my hair off. I started to grow my hair once again. Please get in touch with me. [email protected]