Recently discovered answer from the Rebbe to Michigan's Head Shliach Rabbi Berel Shemtov sheds new light on why CGI Detroit alternated sessions for boys and girls and why they are finally set to purchase a second campground. Full Story, Photos Recently discovered answer from the Rebbe to Michigan's Head Shliach Rabbi Berel Shemtov sheds new light on why CGI Detroit alternated sessions for boys and girls and why they are finally set to purchase a second campground. Full Story, Photos

The 319 girls and 155 boys currently enjoying an incredible summer at Camp Gan Yisroel Detroit are making history. For six decades the camp has run one month for girls, and one month for boys on their Kalkaska, Michigan campgrounds.

This year for the first time ever, both the boys’ and girls’ camps are running for both months of the summer, the girls in Kalkaska and the boys already ensconced in their newly leased campgrounds in Tustin for the last 3 weeks.

The opportunity to lease and purchase the new grounds only came about in the last few months, but the idea to expand has been decades in the making. It was highlighted by the discovery of a letter from the Rebbe’s Mazkirus (secretariat), found in the camp’s archives during the time that the deal was in discussion.

Sixty years ago in 5721, after his first year running CGI Detroit out of a rented property, Michigan’s Head Shliach Rabbi Berel Shemtov wrote to the Rebbe that he would like to buy two plots of land to run a boys’ and girls’ camp simultaneously. He received a response, “B’sheilosoi b’dvar hacamps, hinei, b’heese’m l’hora’as k”k admu”r shlit”a, kniias shnei hacamps – muvan – shel’eis atoh al kol ponim mukdam (In regards to your question about the camps: based on the Rebbe’s instructions, purchasing two camps would – understandably – be too soon at the current moment.).”

The letter continued with a suggestion, “B’im tzorech b’camp l’bonos hashonah – lsadroi b’mokom sochor oh l’yached bishvilon trip echad (If there is a need for a girls camp this year – it should be organized in a rented facility, or one trip [session] should be dedicated for them…).” (the word ‘trip’ was commonly used to refer to a camp month or session). This has indeed been the arrangement at CGI Detroit for six decades of successful summer camps.

While the lease and purchase of the new Tustin site was under discussion someone discovered the letter and the camp hanholo came to a new understanding of the message implicit in the letter.

“B’hashgocha protis the letter was found just as the camp is growing. As per the letter’s instructions, growth must happen at the right time and at the correct pace. B’ezras Hashem we will continue to see the camp grow mechayil el choyil in an appropriate way as per the hora’ah implicit in this letter,” said Rabbi Yosef Gurary, Mashpia of the boys’ camp.

Camp directors and staff are excited to see this new reality unfold. “We have an incredible opportunity to permanently double both the amount of campers and the length of time they will be steeped in the 24/7 chassidishe atmosphere unique to summer camp,” says Camp Director Rabbi Moshe Shemtov.

CGI Detroit attracts campers from all over the USA, from Canada and around the world. In recent years more and more campers have applied. “As the Lubavitcher community around the world grows, we are thrilled to expand our capacity to offer them a summer of immersion in the Rebbe’s inyonim,” Rabbi Shemtov said.

The Camp is set to close on the purchase on the Tustin campus in August making this year’s growth permanent. A capital campaign is underway to fund the purchase of the new grounds.

If you would like to donate please visit cgidetroit.com/donate, or contact Rabbi Mendel Shemtov at [email protected] for more information and dedication opportunities. 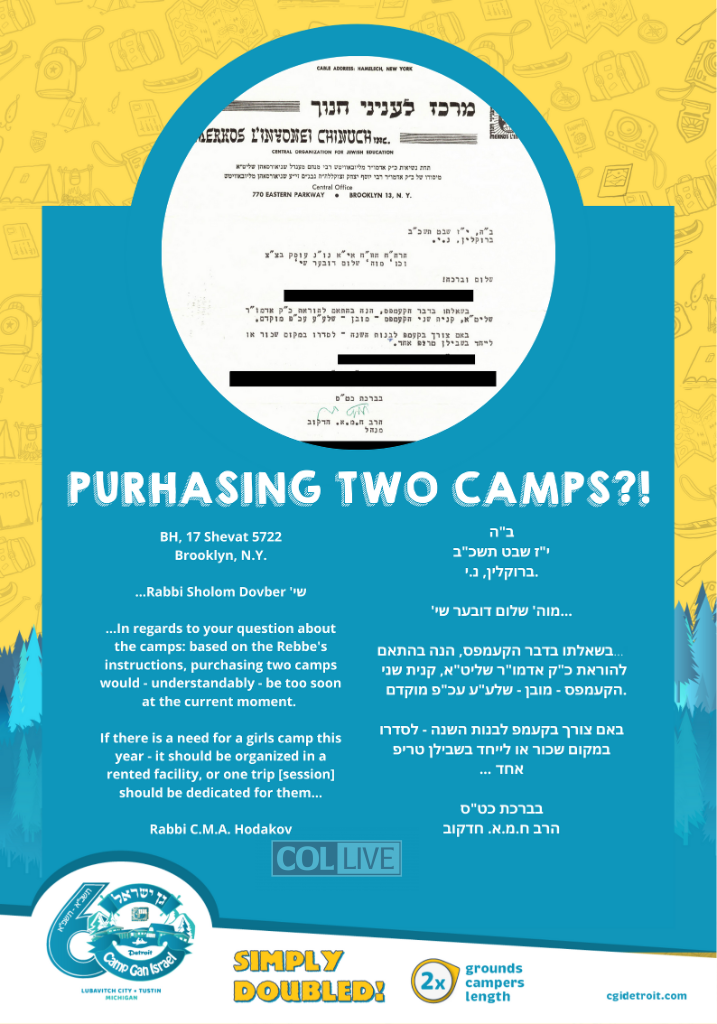 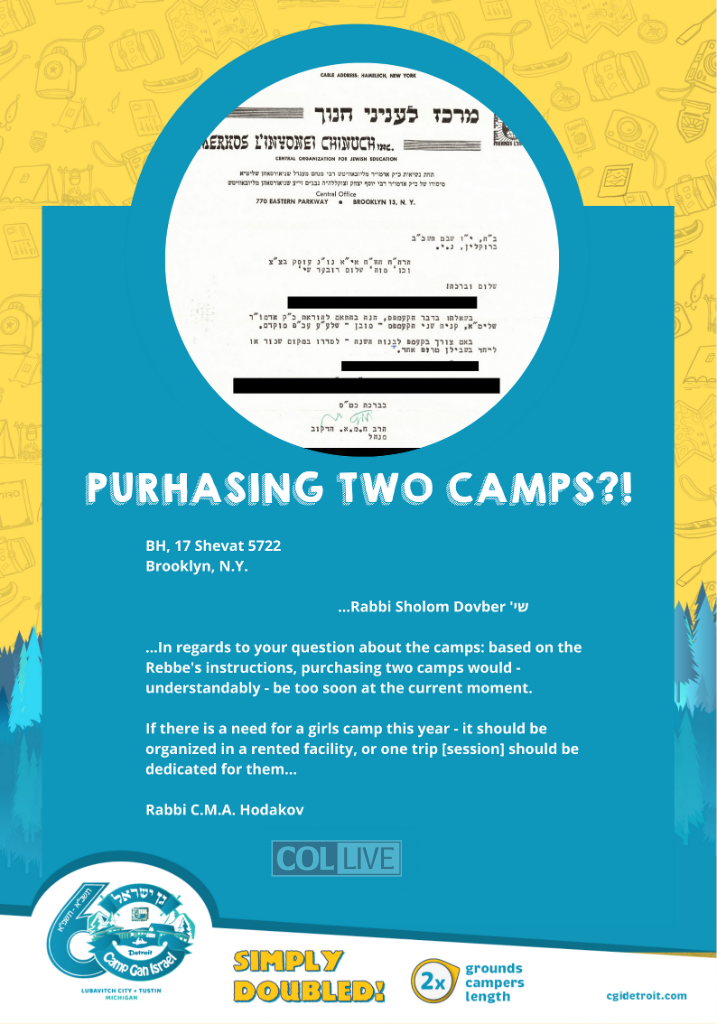 How Should We React to Ben & Jerry’s Boycott