The trial of former Agri executive Sholom Rubashkin began in South Dakota on October 12, though only after a failed effort to reach a plea bargain, according to Rabbi Shea Hecht. Full Story 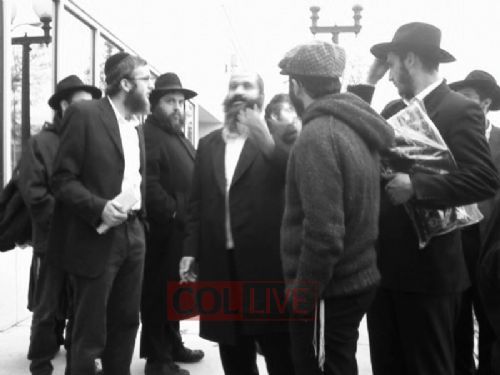 The trial of former Agri executive Sholom Rubashkin began in South Dakota on October 12, though only after a failed effort to reach a plea bargain, according to Rabbi Shea Hecht. Full Story

The trial of former kosher slaughterhouse executive Sholom Rubashkin began in South Dakota on October 12, though only after a failed effort to reach a plea bargain, according to a close confidant of the defendant.

Rabbi Shea Hecht, a leading Chabad Lubavitch rabbi who has provided support to Rubashkin’s defense, told the Forward that Rubashkin, 49, wanted to strike a plea bargain with the U.S. attorneys to avoid a jury trial.

“There were negotiations — an offer was put on the table,” Hecht said. “He had to refuse the offer because compared to what he did wrong, they were asking for too much. There was no way that a man should give the prime of his life away.”

Hecht would not discuss the terms that Rubashkin would have accepted — but he did say that Rubashkin was willing to serve a prison term in order to strike a bargain. Hecht met with Rubashkin in person when the court gave Rubashkin permission to visit New York for the Jewish high holidays. Rubashkin has otherwise been out on bail in Iowa. Hecht said that when Rubashkin visited Hecht’s New York office, he expressed a desire to deal with the charges.

“He said, ‘Listen, things were done wrong, but not what they are claiming,’” Hecht said. “He was very confident.”

The United States attorney’s office that is prosecuting Rubashkin would not say whether a plea bargain had been discussed.

A lawyer for Rubashkin, Guy Cook, also would not comment. Rubashkin has pleaded not guilty to all 163 counts.

Rubashkin and his family are members of the Chabad-Lubavitch Hasidic sect, and the family has received hefty support from other members of the sect in advance of the trial. The day before the trial began, dozens of children gathered at the last Chabad rebbe’s grave to pray “for a miraculous victory” for Rubashkin, according to a colorful poster for the event.

Earlier in the day, a bus load of Rubashkin’s supporters left from the Crown Heights neighborhood of Brooklyn and drove overnight to Sioux Falls. A woman who answered the phone at the number printed on an advertisement for the bus ride would not provide her name. She said that the funding for the trip came from private sources.

“It was a grassroots effort to pack the courtroom with supporters — and hopefully we’ll pull it off,” she said. “We’ll be able to show the court that this man is being charged incorrectly — and he really is what they call a tzaddik,” or holy man.

On October 13, as the trial began, The Des Moines Register reported that the court facilities were inundated with young supporters of Rubashkin. Rubashkin’s nephew, Yossi, told the paper: “I’m extremely optimistic about the trial. That might not make sense to you. It’s just faith. Faith in God.”

Rubashkin has also received significant financial support from a committee formed by the National Committee for the Furtherance of Jewish Education, a Chabad organization that helps imprisoned Chabadniks. Hecht is chairman of the NCFJE, and he said that the group had already given funding “in the six figures” to help Rubashkin’s case. Hecht’s brother, Sholem Ber Hecht, is leading the committee dedicated to Rubashkin’s case.

“The community sees it as an attack, number one, on kosher food, and number two, as an attack on religious Jews,” Shea Hecht said. Don’t the prosecutors and the jury members, plus the ridiculous Judge know that they and all their generations will be cursed for ever by touching a holy man, a tzadik gamour (Sholom Mordechai Halevy ben Rivkah)??????

kol hakavod to all those who went out there!

Bezrat Hashem Everyting will work for the better

The tragedy in this great US of A is that when you’re found guilty of manslaughter you’ll get less than 10 years and with good behaviour you’ll be out in 5 years or so but if you loan application isn’t 100% correct and you hire some illegal aliens, which many companies do (otherwise there wouldn’t be millions of them in the US) you get 15 years, on a plea bargain none the less. Shame on these antiquated Gulag laws. Shame on this country.

but “everyone else does it too” doesn’t usually hold up in court.
many wrongs don’t make you right!

With all due respect to the respected rabbi quoted as the source for this information, was this something that was given to you for public consumption? If so, fine. But if not, it seems like loos lips to me…

The Culpable. Mr. Rubashkin admitted to certain wrongdoings. Show me ANYONE in business who isn’t similar and I’ll show you a NONEXISTENT BUSINESS. As for the CRUELTY of the U.S. Government IT KNOWS NO BOUNDS — HOW? How many innocent people did the U.S. Govt. imprison or execute in the last 100 years? Does this government observe the laws THEY ARE SUPPOSED TO FOLLOW? NO! These laws are: The 7 Noahide Laws, the oldest civilized laws known to mankind, and declared by Congress during the Regan administration because of the efforts of ‘The Rebbe’. NO! THEY DO N O T… Read more »

0
0
Reply
A yid from Postville

We are going to heat the sweet song being danced of……………
DIDAN NOTZACH AY YA YA YA YA AY!

i was on the web last night look at news when i punched this in to google this is what came up i thought it was very interesting:

Y.G from down under!

0
0
Reply
Why we stand with him

The treacherous, communist newspaper The Forward is the one who is responsible for the perdicement that Mr. Rubahkin finds himself from beginning to end. They are the remnants of the self hatting Jewish Bolshviks that put the Friediker Rebbe in prison and sent thousands of Jews to there death. They started hunting Sholom Rubashkin years ago. week after week they worked with their arch liberal buddy’s in PETA to destroy a good man. With this type of pressure, it is likely that Mr. Rubahkin may have made some mistakes, but what we have to remember is that this affair was… Read more »