German airline Lufthansa is coming under withering criticism after airline staff barred all Jews from a connecting flight, with armed officers called in to prevent any Jews from boarding the flight. Full Story, Video 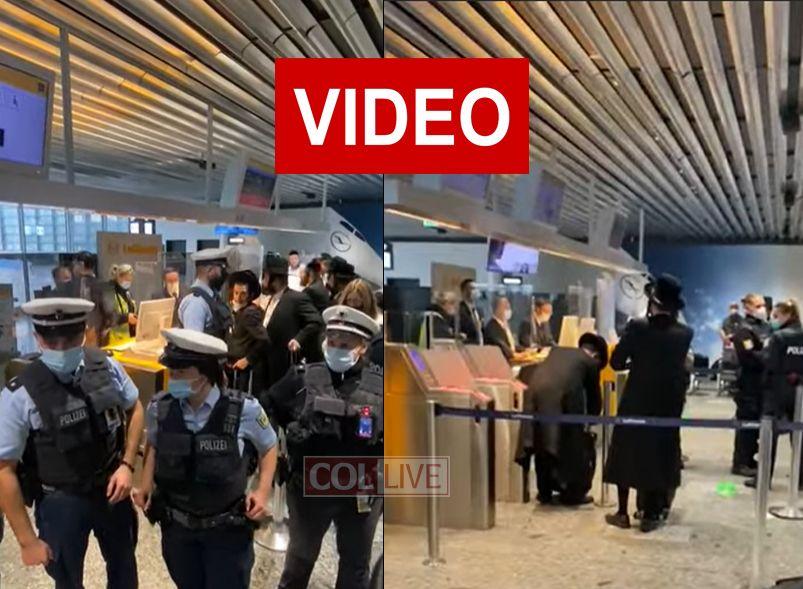 German airline Lufthansa is coming under withering criticism after airline staff barred all Jews from a connecting flight, with armed officers called in to prevent any Jews from boarding the flight. Full Story, Video

By Dan’s Deals and YWN

German airline Lufthansa is coming under withering criticism after airline staff barred all Jews from a connecting flight, with armed officers called in to prevent any Jews from boarding the flight.

The incident took place as a large group of chasidim were attempting to fly from Germany to Hungary to visit the kever of Reb Shayale, zt”l, in Kerestir. According to eyewitnesses, one or two passengers refused to comply with the airline’s mask mandate, leading to a confrontation with the crew.

Additionally, the chassidim said that many of the non-Jewish passengers were not wearing masks but they were allowed to remain on the flight, YWN reported.

In response, the flight staff banned all Jews from catching their connecting flight. Their only crime? Being Jewish.

When the passengers boarded their connecting flight, it soon became clear “this was no typical boarding,” Dan’s Deals website reported.

YouTube just removed our video showing a Lufthansa supervisor blaming problems on #TheJews due to it "violating our hate speech policy".

“The gate agent was paging individuals by name to come up and board the flight. [A passenger] recalled that the paged individuals that were able to board were not visibly Jewish,” a passenger told Dan’s Deals.

In an absolutely shocking exchange filmed with one of the Jewish passengers, a flight crew member says, “It was Jewish people who made problems. Jewish people coming from JFK.”

The shocking incident, coming from a German airline, has sparked outrage across the world, with Jews demanding answers for the airline’s open discrimination of the people their ancestors murdered in the millions just a few decades ago. Chabad in Nigeria Provides Ramadan Meals For the Needy

Mask up. It’s a mandate. This is a chillul Hashem and such an embarassment to our people.

14
-67
Reply
Seriously
Reply to  Not above the law

Not in Europe, this was an international flight, the plane itself was German and they were flying over European airspace. The US government has no jurisdiction abroad, it is quite obvious.

1
-1
Reply
Stockholm sydrome
Reply to  Not above the law

seems like nothing changed in the last hundred years. goodbye lufthansa

And you call it anti semitism

8
-45
Reply
and you call it a chillul Hashem ??
Reply to  A classic chilul hashem

This is straight out anti semitism

Not surprised at all. Eisav hates Yaakov. Nothing new. Why give the descendants of Nazis your cash anyhow? So they can kick you off of their planes?

They are never to be trusted. Unfortunately same old. They should never be used by Jews. I was on a flight _33 years ago going to or coming from South Africa and a passenger on the plane wore all the sentiments of yemach shemom, acting to me like one of their animals.

Im here for the commenters with a Jewish inferiority complex that will blame the Jews.

23
-6
Reply
To determine if the outrage is justified…

Just swap “Jews” with another race. Imagine a large group of black people were (allegedly) misbehaving on a flight, and 25 unrelated black people were denied boarding on the next flight because “black people made the problems”. There might be literal riots going on as a result. People would have lost their jobs so quickly they wouldn’t have had time to blink. So yes, when a Jew gets thrown off a flight early in the pandemic and claims they were singled out due to being Jewish, they may or may not be correct. But this is cut and dry. Terrible… Read more »

The group joined together and said they are traveling together…

You did not read the run down by Dan’s Deals. It’s revolting that you would lend your voice to public support this without doing your due diligence. Over 127 Jews were forbidden not only from flying to destination but also from booking flights back on this airline. The article very clearly lays out that any obvious looking Jew who boarded from JFK was banned regardless of his or her behavior in flight and regardless of whether or not they booked as part of a group or not. The only things that was required was that they be obviously Jewish. (Except… Read more »

16
0
Reply
That isn't true
Reply to  Not the story

Many jews that weren’t part of the “group” were also denied. And besides the fact, that a group of 80 ppl don’t deserve to be punished for the avairos of 1 or 2.
Read the DansDeals post about this story https://www.dansdeals.com/?p=301937

8
0
Reply
Here's an idea
Reply to  Not the story

Read the info before you comment. What you are saying is blatantly untrue. Take 15 mins and read Dansdeals post on it.

Once had a similar incident with United in TLV they force all charadi passengers to gate check their luggage. Because some charadim brought to many items.

If you’re looking for more details about this. It wasn’t that they weren’t masked. It was that a few people fully weren’t masked and therefore every Jew was barred from the flight, selected by name and by appearance, regardless of if they were traveling alone or with the group. Sickening!!!

If you aren’t willing to read the entire issue why don’t you simply sit this one out, brother

I can’t tell what’s sadder: Jews still refusing to wear their masks, or Jews faking anti-Semitism and creating the boy who cried wolf situation for the rest of us.

This comment is more sick than the events itself. Your behavior is repulsive. I wish you a lot of healing in understanding why you are so hateful.

What’s worse are the commenters blaming the Jews. Just read the article!

Everything we see and hear is a lesson in serving Hashem. We are all on the flight to the geula shlaima and are responsible for one another.

Watch the video posted….
The person said all Jewish ppl from JFK are banned from this flight because they are paying for the ‘crime ‘ of all Jews.
If one non-Jew doesnt wear a mask not all non Jews are banned!
It’s called anti Semitism because lumping Jews together for an issue……
So shocking it’s giving me chills and yes 2022 in a western country unfortunately means nothing for Jews. Just fancier ways to silence Jews and still feeling like a civilized western country

Disgusting. I wonder what the Jews (presumably) on this thread who claim that this was our fault would do if they were punished along with a minority of regulation breakers because they look Jewish.

It is completely sickening and unjustified the way the airline behaved! Definitely is clearly clearly Anti Semitic! Shameful!
At the same time as Yidden we have to know that we are always watched and penalized and therefore have to behave accordingly. When you go anywhere as a frum person, you are the impression people have of Yidden. It’s a huge an awesome responsibility!

They show it don’t fly with them anymore. Let Hashem handle them.

1
0
Reply
why are Jews using a German airline

How are we already forgetting the atrocities. Stop going to Poland Ukraine Hungary etc. As an older friend once said “get all the Jews out of there and burn it all to the ground.”
2022? First world country? HA! antisemitism will continue until Moshiach comes, bekarov beyameinu.

EVEN AT THE HEIGHT OF COVID YIDDEN WERE BOARDING AND SITTING DURING FLIGHTS TAKING OFF THEIR MASKS OR PRETENDING TO WEAR THEM AS CREW WENT BY, TRYING TO FOOL THEM, DISOBEYING THE RULES.
IS IT ANY WONDER!!
WE ARE IN GOLUS FOLKS, SMELL THE COFFEE………DINA DMALCHUSA DINA

ITS GERMANY FOLKS, NO FORGIVING AND NO FORGETTING. BOYCOTT THE NAZI AIRLINE

eutsche Luft Hansa A.G. (from 1933 styled as Deutsche Lufthansa and also known as Luft Hansa, Lufthansa, or DLH) was a German airline, serving as flag carrier of the country during the later years of the Weimar Republic and throughout Nazi Germany, when it had close links to the Nazi Party.

Stop giving musar , it is nothing to do with the masks this airlines Can’t stand Jews , we travel with them and we make sure not to wear a hat Instead we wear a sports cap they are Major antisemits way before COVID . We only fly with them when we can’t get any other way to get to our destination . This should not be let go this time , it’s time to make a big fuss. Once in for all !